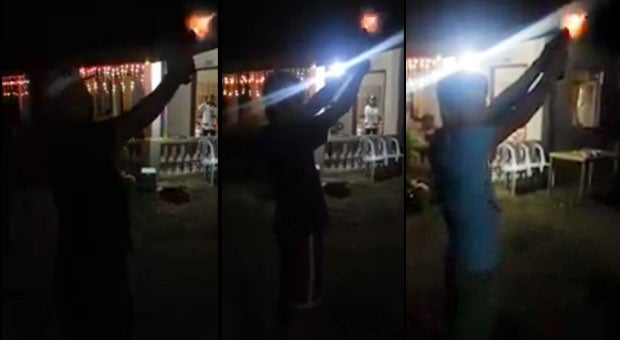 Screengrabs from a video made public on Facebook show three men firing guns during the New Year’s Day revelry.

MANILA, Philippines–The Philippine National Police is investigating an incident of indiscriminate firing which went viral on Facebook after a netizen posted photographs of a shooting spree shortly after the New Year revelry.

Chief Supt. Wilben Mayor, the PNP spokesman, said the Ilocos Sur provincial police office was investigating the incident which a resident of the province had posted on Facebook.

Deputy spokesman Senior Supt. Robert Po said police were also checking the firearms license database to verify if the guns used in the incident were licensed.

“[But] whether licensed or not, the police investigation can be started by interviewing witnesses so that appropriate criminal charges will be filed,” said Po.

He said the police could ask the courts to issue search warrants for the guns in question if these turn out to be unlicensed.

The PNP made the statement in reaction to several photographs uploaded on Facebook showing a group of men firing guns during the New Year revelry.

A certain Philip Andrew Funtanilla posted an album showing six men indiscriminately firing rifles and hand guns. The post was still accessible on Saturday but appeared to have been taken down on Sunday.

On Saturday, the album, uploaded on Jan. 1, was shared 94 times and had at least 24 likes.

The six men have been identified and the PNP will file charges against them.

The Ilocos Sur provincial police verified the identity of the six men in the photos and video after visiting the place of the incident.

“Appropriate charges are being prepared against them and the Narvacan police is determining ownership of the firearms. Verification is being made with the Firearms and Explosives Office whether or not these persons are holders of any registered firearms,” said Felix in report.

The account featured a video of the firing spree, which on Saturday was viewed over 3,000 times and had 145 shares. It could no longer be viewed on Sunday.

The post outraged netizens who urged the PNP to take action against the gun-toting men.

The six men in the photographs and the video may be charged with illegal discharge of firearms, if the guns were registered and there were witnesses, said Po. Their gun licenses may also be revoked.

The suspects may be charged with illegal possession of firearms under Republic Act No. 10591, or the new gun control law.

Meanwhile, the Philippine Army said a soldier who allegedly fired his gun in a drunken fit during the New Year revelry in Morong, Rizal, may be discharged from the service if the allegations against him were proven true.

Detoyato said the allegation against Pogado was a “dischargeable offense,” which could mean his dismissal from the military.

Pogado is reportedly assigned to the Philippine Army training command in Dawsa, Cotabato, but had returned to Morong, his hometown, to celebrate Christmas and New Year’s.

He was arrested after the new year for allegedly indiscriminately firing his gun, hitting a boy in the lower back and right thigh. The boy is in stable condition at the Morong provincial hospital.

The military, unlike its police counterpart, does not seal the muzzles of its personnel’s service firearms but instead specifically bans indiscriminate firing during the holidays.