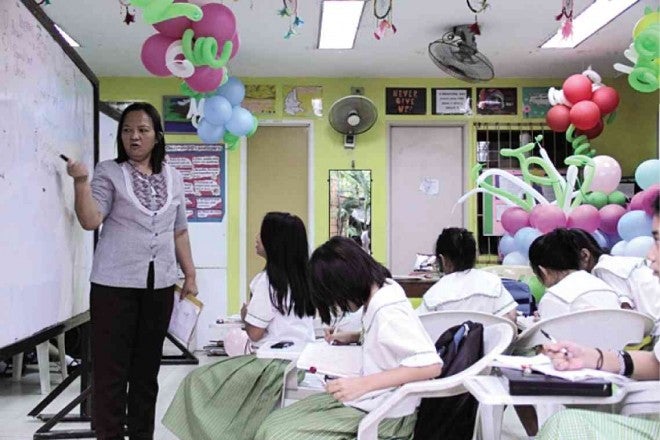 GIRLS INTERRUPTED (NO MORE) Teens rescued from abuse and sheltered by Cribs can resume their studies under a partnership with Jose Fabella Memorial School. CONTRIBUTED PHOTO

Over the last four decades, Cribs Foundation Inc. has sheltered more than 700 women and over 2,000 babies, quite literally through hell and high water.

There were times when the wards had to be evacuated to a nearby basketball court during flash floods, and also when a 2013 fire threatened to destroy the two-story house that serves as its care facility in Marikina City.

The nonprofit organization continually faces challenges, from budget constraints to lack of personnel, but “divine providence” has enabled it to pursue its mission as a haven for the abused and the abandoned, said Cribs board member Cecilia Garrucho.

“There are times when we really have nothing, then all of a sudden a solution presents itself. We’ve seen it happen time and again. It’s really the work of God,” Garrucho said.

The latest miracle came two weeks before Christmas, when a donor gave funds to jumpstart the construction of a new building that will finally replace Crib’s 40-year-old house on Major Dizon Street in Barangay IVC (Industrial Valley Complex).

Pending a formal announcement, Garrucho withheld the name of the donor and the amount given. But according to the foundation’s website, the four-story building project is estimated to cost P22 million.

And before the year ended, Cribs received one more holiday gift: The local government named it one of this year’s recipients of the Gawad Galing Marikeño, an award given to individuals or organizations whose excellence in their chosen fields has become a source of pride for their host city.

In an Inquirer interview during the Dec. 30 awarding rites led by Marikina Mayor Del de Guzman, Garrucho said the recognition would inspire Cribs “to persevere more in providing the children much needed help and support.”

The foundation was established in 1974 by the wives of two American missionaries who took under their care two babies who, after being abandoned by their parents, were initially placed in the custody of the Department of Social Welfare and Development.

To date, Garrucho said, Cribs has looked after 2,067 abandoned infants and toddlers (up to age 4) as well as 730 girls (aged 7-17) who were victims of sexual abuse. The care facility in Marikina can take in only 25 children and 25 women at a time and those who can’t be accommodated are referred to partner groups, like Ecpat Philippines in Quezon City.

Cribs executive director Josefina Dimalaluan explained that, in most cases, the children get adopted or are reintegrated with their families within a year. For the abused women, they spend about two years under Crib’s care to “heal and recover.”

“If they have supportive families, they are reintegrated with them. If not, especially if the perpetrator is a member of family, we refer them to other agencies that will help them become independent,” Dimalaluan said.

The girls are also provided “in-house schooling” through a partnership with Jose Fabella Memorial School in Mandaluyong City, which sends three teachers to Marikina to hold daily classes for them.

Many former wards, especially those who were adopted by foreigners and found successful careers abroad, often return to the country not only to trace their roots but also to repay the organization in whatever way they can. Some donate cash or spend time to help supervise or play with the children.

A former ward who went on to become a school principal would often visit the center to check how the girls are doing in their studies.

But even as Cribs looks forward to a bigger, better home, the tasks ahead may not get any lighter, a reality that Dimalaluan underscored with a heartrending appeal—one that is addressed to parents caught in that desperate, agonizing state: “If they’re really forced to give up their children, it’s better if they just approach us for help rather than abandon them in parks or bathrooms.’’

This way, the children are no longer exposed to danger and the foundation can immediately obtain background information on the new wards, she said.

Read Next
Archbishop Socrates Villegas: Let glam go for Jesus to glow
EDITORS' PICK
PH preps for China virus: Question of when, not if
Beyond water service: Maynilad builds massive infrastructure projects to clean up Metro Manila waterways
Museums ‘put to sleep,’ churches closed amid volcano’s unrest
Seventh judge assigned to handle De Lima case
SM continues to send relief assistance to remote towns in Batangas
Get exciting deals and discounts when you download the new McDonald’s App
MOST READ
Taal Volcano flexes signs of restiveness anew
Part of Aurora Boulevard in Cubao closed from Jan. 25 – Feb. 1
Passengers from Wuhan, China to be flown out of Kalibo, Aklan – CAAP
Lacson on Duterte’s threat to end VFA over Bato’s canceled visa: Where is the connection?
Don't miss out on the latest news and information.