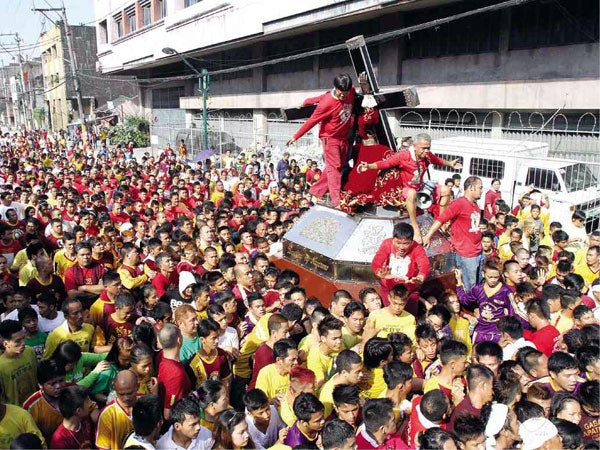 Devotees join a procession for the Black Nazarene in Quiapo, Manila, in this photo taken during last year’s feast. INQUIRER FILE PHOTO

MANILA, Philippines—Declared unstable by the Department of Public Works and Highways, the MacArthur Bridge will be closely monitored by the police to ensure that the crowd does not use it to get to Quiapo Church in celebration of the Black Nazarene feast on January 9.

Supt. Marissa Bruno, public information office chief, said last year’s procession route was revised so that it would pass through Jones Bridge instead of MacArthur Bridge. However, some devotees used to the old route were able to pass through MacArthur Bridge despite barricades put up by the local government.

This year, more officers would be posted in the area to avoid the same incident, said Bruno.

To ensure the safety of devotees who will participate in the gathering, the Manila Police District (MPD) has divided among its 11 stations the monitoring of the grand procession’s 6-kilometer route from Quirino Grandstand to Quiapo Church.

Bruno said officers from MPD’s 11 stations would be assigned to monitor one segment each of the grand procession’s route. They will be assisted by police from the National Capital Region Police Office, as well as from the Northern, Southern, Eastern and Quezon City Police Districts.

The Ermita Police Station and Plaza Miranda Police Community Precinct will serve as security command posts throughout the whole procession. Overall, around 2,000 police officers will be deployed in Manila, with majority of them focused on Quirino Grandstand and Quiapo Church, Bruno added.

Officials from the city government of Manila, particularly those from barangays on the procession’s route, the Manila Disaster Risk Reduction and Management Office, and Manila health department, Bureau of Fire Protection, Philippine Coast Guard, Office of the Civil Defense and Department of Health will also be on standby to respond to emergency situations.

While most emergency cases during the annual grand procession are health-related, with many fainting from exhaustion or lack of air, Bruno reminded devotees to remain vigilant for criminals who could take advantage of the crowded event.

“Last year, we had minimal street crimes during the feast of the Black Nazarene—just eight victims of theft. However, we ask the public not to risk their safety anymore by wearing unnecessary jewelry or bringing huge amounts of cash,” said Bruno.

Culture, faith, and the Black Nazarene