Damage due to Malaysia flood close to $284M 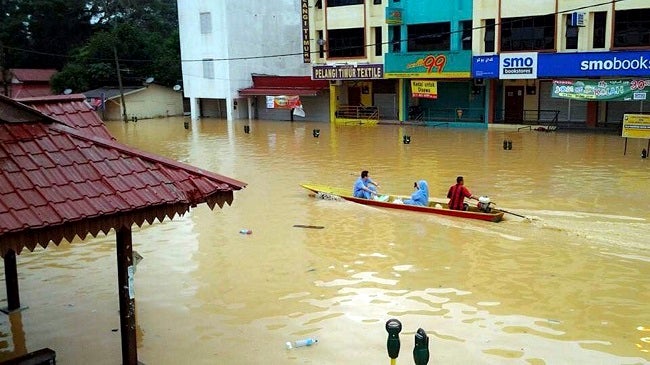 In this Wednesday, Dec. 24, 2014 photo, residents using a boat pass by flooded shops in Kuala Krai, Kelantan state, Malaysia. Malaysian Prime Minister Najib Razak said Friday, Dec. 26, 2014 he was cutting short his U.S. vacation to deal with the worst floods in the country in decades that have killed five people and displaced more than 100,000. AP

PETALING JAYA — Realization is starting to sink in on just how devastating the Malaysia floods have been on the country, infrastructure and people.

But as the nation moves to recover, it is finding that there are more who have also lost.

Among them are some 69,000 rubber smallholders and up to 50,000 oil palm planters whose plantations are submerged.

They are suffering a loss in income while a lengthy submersion in water can damage the oil palm trees, adding to the cost.

In the worst-hit east coast state of Kelantan alone, there are about 150,000 farmers and livestock breeders with destroyed padi fields and vegetable plots, drowned livestock and swamped fish ponds.

The total damage to property and infrastructure in all the affected states is still being tallied but already the cost is close to 1 billion ringgit (US$284 million).

The tally does not include the losses incurred by the rubber, oil palm and agriculture sectors, which are among the main economic activities for residents of the east coast states.

The National Association of Small Holders (Nash) said that about 119,000 smallholders were affected and that a survey to determine the losses they suffered were ongoing.

“This has been a terrible flood and worst hit are oil palm smallholders in Pahang and Terengganu as well as rubber smallholders in Kelantan,” said Datuk Aliasak Ambia, president of Nash.

He said the rubber smallholders needed help in the form of equipment, such as cups and tapping knives, while the oil palm smallholders were hoping for fertilizer aid.

Nash has about 375,000 members who each plant rubber, oil palm and cocoa on plots of land less than 40ha.

“So far, what I can say is that most of the damage has been to our plantations in Gua Musang, Kelantan, and in parts of Pahang,” he said.

Agriculture and Agro-Based Industries Minister Datuk Seri Ismail Sabri Yaakob said a more accurate estimate of damage was not yet possible because most of the farmers were still in relief centers.

Also, with the farmers affected, the prices of vegetables are rising nationwide because the commodity has become scarce and inaccessible roads make it difficult to get the produce to market.

Works Minister Datuk Fadillah Yusof said he could only give an accurate estimate on damage once the water subsided.

The Defense Ministry has pledged to help the Works Ministry with manpower to repair damaged public infrastructure, especially roads.

Unless roads are made accessible quickly and the weather improves, the supply of foodstuff in the badly affected states would only be fully restored within two weeks, said Domestic Trade, Cooperatives and Consumerism Minister Datuk Seri Hasan Malek.

PM under fire as 100,000 flee worst Malaysia floods in decades

More than 100,000 evacuated in 4 flood-hit states in Malaysia