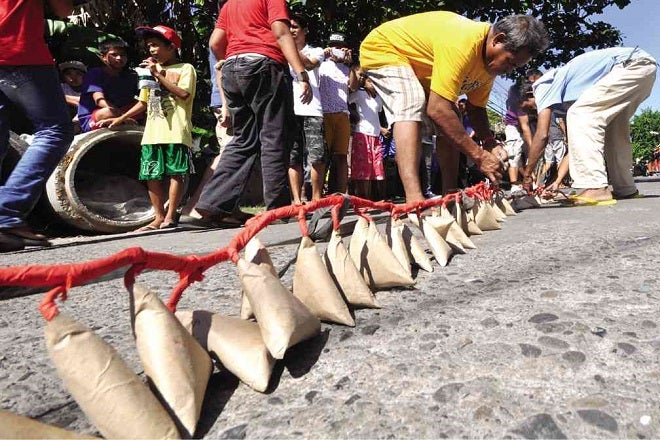 Residents of Barangay Pogo Grande in Dagupan City string firecrackers to prepare for a noontime celebration of the New Year, which the village has become famous for. WILLIE LOMIBAO/CONTRIBUTOR

DAGUPAN CITY—The tradition of a village here to welcome the New Year by lighting thousands of firecrackers at noon of Jan. 1 lives on, each time drawing bigger crowds and spectators.

On Thursday, village officials and guests of Barangay Pogo Grande, lighted 100,000 assorted firecrackers tied to a string that was hung across the length of the village street.

At noon, one end of a string was lit, igniting a sequence of blasts that lasted for 30 minutes.

“We have been doing this for more than a decade now. It makes people happy,” said George Galvan, barangay captain of Pogo Grande, a known producer of firecrackers and other pyrotechnic materials.

The event had been drawing as much as 2,000 spectators, including foreigners and residents from other villages.

The firecrackers were commodities which the manufacturers were unable to sell.

Galvan said he had continued the tradition every New Year’s Day “to ward off bad luck” for the village in the coming year.

Spectators had commented that the string of firecrackers this year was shorter than before. Galvan said it was because the firecrackers were strung closer to make them ignite faster.

A fire truck and a Red Cross ambulance were on standby to ensure a quick emergency response in case of accidents.

Last year, 11 spectators were treated at the Region 1 Medical Center here for minor blast burns from wayward firecrackers that flew their way, according to Dr. Noel Manaois, the hospital spokesperson.

The Philippine Information Agency (PIA) here said the village tradition began 16 years ago when then barangay councilor, Myrna Esteves, lighted a string of firecrackers in their compound.

“The simple activity caught the interest of their neighbors and they joined in the activity of lighting together unsold and unused firecrackers,” the PIA said in its website. Gabriel Cardinoza, Inquirer Northern Luzon