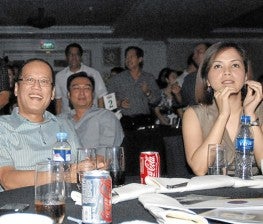 ‘BONGGA KA ’DAY’. President Aquino is spotted enjoying the reunion concert of the 1970s Hotdog band at the Dusit Thani Hotel with an unidentified friend on Monday night. The President arrived at the hotel with former Sen. Mar Roxas, Secretary Ricky Carandang and several government officials. Palace officials refused to divulge the name of the girl. JIM GUIAO PUNZALAN

MANILA, Philippines—The concert wouldn’t start without the President and when he finally came, he had a surprise with him: A new date who a concert promoter said comes “from Cebu.”

Aides of President Benigno Aquino III refused to identify the woman, with a source close to the President saying this was to give “romance a chance to blossom.”

The country’s most eligible bachelor and his female companion arrived together to watch the Hotdog reunion concert on Monday night at the ballroom of Dusit Thani Hotel in Makati City.

Those who a had close look at the pair described her as having mestiza features similar to those of Shalani Soledad, the President’s former girlfriend.

“They have been friends for sometime now and just renewed their acquaintance recently,” the source said, adding that the 51-year-old Mr. Aquino and his latest date had gone out “several times” before.

It was the incoming presidential chief of staff, former Sen. Mar Roxas, who bought the tickets for the 34 people who occupied the three tables reserved for the President and his group, according to promoters.

Roxas came without wife Korina Sanchez, who reportedly had just returned the same day from a trip to Korea.

Judging from their smiles and occasional talk, Mr. Aquino and his date seemed to have enjoyed the show—notwithstanding the stolen shots taken by the Inquirer photographer, who said he tried his discreet best not to incur the ire of presidential bodyguards, who kept motioning to him to train his camera elsewhere.

Carandang, who sat a table behind the President, said he thought “they all had a good time.”

Asked by Malacañang reporters about Mr. Aquino’s companion, Carandang said: “I don’t know who she was but she was obviously acquainted with the wives of Bong (Naguiat) and Rene (Almendras).”

Carandang said he did not have the chance to meet or talk with her.

President Aquino’s love life has been a subject of media interest since he assumed the presidency 10 months ago. Media interest grew after he split up with former girlfriend and now television gameshow cohost Shalani Soledad, a councilor in Valenzuela City.

The President had been open to the media about going out with Uy but later clammed up and asked journalists to refrain from reporting about his lovelife.

Not a few fans of the band were incredulous to see Joey Abando of The Boyfriends playing guitar at a gig whose audience had expected nothing but Hotdog tunes.

Thirty years ago that would have provoked howls of insulting laughter — since Hotdog had parodied the Bee Gees-clone music of The Boyfriends and another group, VST, in the song “Meowww.”

It was for camaraderie, Hotdog bassist and main songwriter Dennis Garcia told the Inquirer a week before the show. Abando had lived abroad for many years and wanted to play some gigs, Garcia said.

When two band members were given the spotlight with solo numbers in Journey’s “Don’t Stop Believing” and Guns ’N Roses’ “Sweet Child O’ Mine,” there were looks of disbelief among the crowd.

Things became so disorienting there was nothing left to do but laugh—even as the performers were warmly applauded later on for their, err, talents in aping foreign acts.

There were more unsettling moments: Hotdog guitarist-vocalist Rene Garcia calling Ramon “RJ” Jacinto, who was seated at a table with his wife, to jam onstage.

A few shouted for Jacinto to play one of his original songs, “Muli,” but Garcia had already requested another cover, Richie Valens’ “La Bamba.”

Jazz singer Arthur Manuntag, a latter-day Hotdog member, was also called onstage and sang “To Love Somebody”—Michael Bolton-style. He was obviously staging a comic act, although he couldn’t hide the power of his vocals and almost stole the show.

Two of the backup vocalists were called again, this time to sing “The Prayer.”

The dinner-concert that also served hotdog and beef sandwiches had transformed into a “chopsuey” gig.

“It’s open mic time,” commented somebody in the audience, referring to the unfolding free-for-all repertoire.

No dance for Aquino

But if the plan was to save the best for last, it succeeded. When the first lyrics of “Manila” were heard, the crowd broke into loud cheers.

Roxas was seen egging Mr. Aquino and his date to dance, but the couple begged off—letting Roxas himself to oblige when a woman in the audience invited him to get up and groove to the music.

Before the last song was played, Mr. Aquino was seen leaving with his date. He was stopped at the door by a group of friends for some photos. His lady friend walked fast ahead of him.