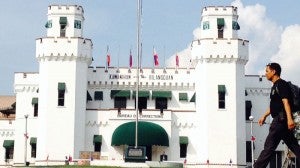 The victim suffered bruises all over her body but was not raped, according to Bureau of Corrections (BuCor) Director Franklin Jesus Bucayu, citing a medico-legal report.

In a phone interview, Bucayu named the suspect as Norvin Domingo, a Bahala na Gang member who was convicted for robbery with intimidation. He has been inside Bilibid since July 2012.

Bucayu said the victim positively identified Domingo who invited her to go to the park.

“He immediately admitted to the offense,” Bucayu said.

The prison official said the child went to the NBP with relatives to visit her father who was also a member of the Bahala na Gang.

The child also attended a children’s party hosted by the Bahala na Gang for the children of its members.

Justice Secretary Leila De Lima said the child went missing between 2 p.m. and 4 p.m. and was found unconscious inside the comfort room of the Roman Catholic Chapel. She had no underwear and a rope was wrapped around her neck.

Based on the medical report by the Philippine National Police Crime Laboratory, the child was not raped.

“No evident of congenital injury, no laceration,” the medical report stated.

Nonetheless , De Lima said she would ask the National Bureau of Investigation to examine the child to make sure if she was raped or not.

“If confirmed that there was no rape, we will file a case for attempted rape and child abuse,” De Lima said.

Meanwhile, Bucayu said Domingo had been taken to the Disciplinary Cell pending the filing a criminal case against him.

“He will also be sanctioned administratively. He will face the Board of Discipline,” Bucayu said explaining that his visiting privileges will be cancelled and his Good Conduct Time Allowance will also be affected.

The Good Conduct Time Allowance is needed to determine whether an inmate’s sentence can be shortened.