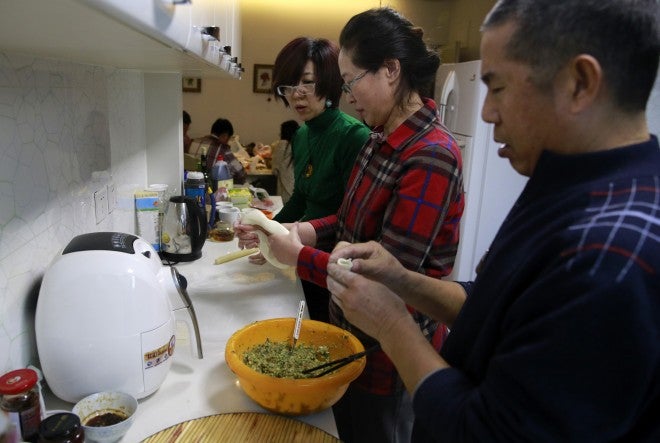 In this Sunday, Dec. 28, 2014 photo, relatives of passengers aboard Malaysia Airlines Flight 370 that went missing on March 8, 2014 make dumplings during their year-end gathering at a house in Beijing, China. Images of bodies and wreckage floating in Indonesian waters gave relatives of those lost aboard AirAsia Flight 8501 anguish and grief, but they also provided the answers that other families have sought in vain for nearly 10 months. AP

BEIJING — Images of bodies and wreckage floating in Indonesian waters gave relatives of those lost aboard AirAsia Flight 8501 anguish and grief, but they also provided the answers that other families have sought in vain for nearly 10 months.

Those with loved ones aboard Malaysia Airlines Flight 370 can only imagine what has happened to them, and can only hope to one day know for sure.

“We have been living in anxiety, fear and hate, and our lives have been utterly messed up, but we as ordinary people are unable to do anything,” said Dai Shuqin, whose sister was on the missing plane with her husband, daughter, son-in-law and grandchild.

What happened to MH370, which took off on March 8 from Kuala Lumpur, Malaysia, en route to Beijing, remains a mystery. The jetliner disappeared after veering off course and flying for hours with its communications systems disabled. It is thought to have crashed about 1,800 kilometers (1,100 miles) off Australia’s west coast, but no trace of the aircraft or the 239 people aboard — most of whom were Chinese — has been found despite an exhaustive and continuing search.

On hearing the news that the AirAsia plane had lost contact on Sunday morning, MH370 relatives said they immediately sympathized with the families who were in the same position they were on March 8. “I can feel the coldness they are feeling now,” said Jiang Hui, whose mother was on MH370.

Two days later, with debris spotted in the sea, it was already a different story. Some families of the Flight 370 victims felt a sort of envy.

Families of those on the AirAsia flight “are luckier than us, because they know what happened soon afterward,” said Song Chunjie, whose sister was on the plane on her way back from a photography holiday. “Knowing the bad news is painful, but it’s even more painful for us to live with uncertainty and have to wait to know what actually happened.”

“They can find (Osama) bin Laden, he’s just a single person,” added the 50-year-old businessman. “How can they not find such a big airplane? …. We must get the answers that can stop such a tragedy happening again in the future.”

Since Flight 370 disappeared, relatives of the missing have helped each other bear the turmoil of not knowing. Many of them spent weeks together in a hotel in the northeast of Beijing where they waited for news of the flight.

They have forged new friendships, demanded answers and endured some hassles from Chinese authorities, who are wary of any cause that may trigger social instability, even those that seem apolitical.

Relatives say they have been under regular police surveillance, and that 16 of them were detained, with some beaten, in mid-July while at a support center.

Li said that when he went to Tiananmen Square with two other relatives, they were held at a security check for 40 minutes after security officers found a T-shirt with the phrase “Pray for MH370” in his bag. They were sent on their way, but trailed by a police officer.

Relatives of victims continue to meet each other in social settings, or in part of a sports center that has been set up to enable them to send questions to Malaysia Airlines and the Chinese and Malaysian governments.

Traveling between home and this center “is my daily life,” said Dai, who said it was taking a huge emotional and financial toll on her. “But as long as my health allows it, I will continue to do so and will never give up.”

Groups of relatives have small get-togethers to chat with and comfort each other. On Sunday, Dai and some others met at Jiang’s house in central Beijing to make dumplings, an activity overtaken by news of the AirAsia plane.

Dr. George Hu, a clinical psychologist at Beijing United Family Hospital and Clinics, said the relatives of the MH370 passengers are experiencing a psychological phenomenon that parents of children who are kidnapped also go through.

“Worse than grief is the not knowing, the in-between, do I grieve or do I hope. That’s hard,” he said. “It’s a very difficult place for the psyche to be and many people would say it’s worse than grief.”

President Xi Jinping said Wednesday that the missing passengers have not been forgotten.

“This year we also experienced some sad moments,” he said slowly and somberly in his New Year’s speech. “MH370 went missing and more than 150 compatriots are still unaccounted for. We haven’t forgotten them and we must continue our efforts and try every means to find them.”

The passengers’ relatives wonder when — or if — their agonizing waiting game will end.

“If there’s no conclusion, you think there’s still hope,” said one of them, Steve Wang, who said he has carried on working as normal so other people don’t worry about him.

“Maybe the mystery will never be solved,” he added. “Maybe it will take a very, very long time: 3 years, 5 years, 10 years or 20 years. Anything’s possible.”