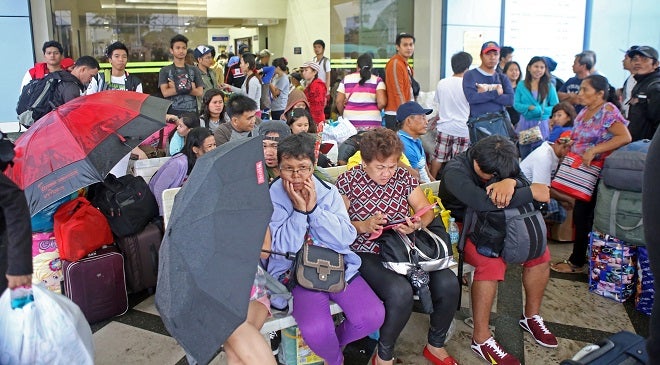 STRANDED PASSENGERS. Many passengers were stranded in Pier 1 in Cebu City on Monday due to Tropical Storm Seniang. LITO TECSON/CDN PHOTO

SAN PEDRO CITY, Laguna—Thousands of passengers were stranded Tuesday in various ports in the Mimaropa region consisting of Mindoro, Marinduque, Romblon, Palawan as the authorities suspended port operations due to Tropical Storm Seniang.

Also stranded in Roxas were six vessels and 66 rolling cargoes bound for Caticlan.

Authorities also suspended port operations in Puerto Princesa City and in Coron, both in Palawan, due to inclement weather.

RDRRMC Director Eugene Cabrera, in an email, said the region continued to have cloudy skies with light to moderate rain.