AFP to troops: Hold fire during the New Year 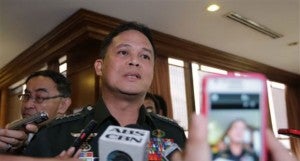 MANILA, Philippines — Soldiers can celebrate the New Year, but not with a bang, according to their commanding general.

General Gregorio Pio Catapang, Armed Forces of the Philippines chief of staff, on Monday told his troops that they should celebrate the coming of 2015 with their families and not with their firearms.

In a statement, Catapang reminded soldiers of the dangers of the indiscriminate firing of guns and of using illegal firecrackers, and the subsequent penalties.

Lieutenant Colonel Harold Cabunoc, AFP Public Affairs Office (PAO) chief, said firing a gun, even into the air, posed a great risk to everyone around it.

“The act of setting off huge and illegal firecrackers and shooting guns into the air pose a great risk of injury and even death to innocent people,” Cabunoc said. “We support the government’s drive to stop the practice of firing guns and igniting illegal firecrackers to celebrate the New Year.”

Cabunoc said indiscriminate firing was punishable under the Articles of War and soldiers caught illegally discharging their weapons face demotion or even dismissal from the service.

The PAO chief urged the public to immediately report incidents of policemen or soldiers indiscriminately firing their guns.

How to stop, hopefully, the New Year’s Eve mayhem