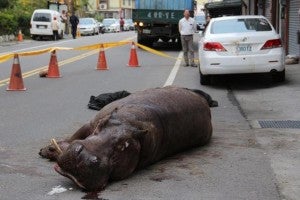 An injured hippo lies on the ground after it jumped from a truck in Miaoli county, Taiwan, while being transported to a farm. AFP

TAIPEI, Taiwan — A hippopotamus in Taiwan died on Monday after suffering two accidents last week, once when it fell from a moving truck and again when its container was dropped as it was being returned to its pond.

The animal, named “A Ho” after the Chinese word for hippo Ho Ma, was found dead in its pond at a farm in central Taichung city.

Agriculture Minister Chen Bao-ji has slammed A Ho’s owner, the head of a private ranch, for what he said was carelessness in transporting the animal and, while a post-mortem will be performed on the mammal to determine    the exact cause of death, the government is considering prosecuting the hippo’s owner.

“The city government has asked prosecutors to look into the case,” Chen Ming-hui, a local official, told AFP, adding that the ranch has been ordered to come up with a plan to improve the management of the rest of animals being kept there.

The owner could face a jail term of up to a year under the island’s animal protection law.

The first of the accidents happened Friday when the panicked hippo jumped from the truck he was being transported in, breaking a leg.

Television footage showed the enormous animal lying on the road — where it remained for several hours — with a white fluid oozing from its eyes.

Then, when the hippo was being taken back to the farm for treatment of its injuries, the cable on a hoist broke and the animal’s container crashed to the ground from a height of two meters (6.5 feet).

“The animal was not properly protected during the transportation process, leading to its injuries. What’s worse, it had not received due medical treatment the last two days,” said Chu Tseng-hung, the head of the non-profit Environment and Animal Society of Taiwan.

A Ho was a star attraction at its farm and had even appeared in a popular television soap opera several years ago, according to local media.