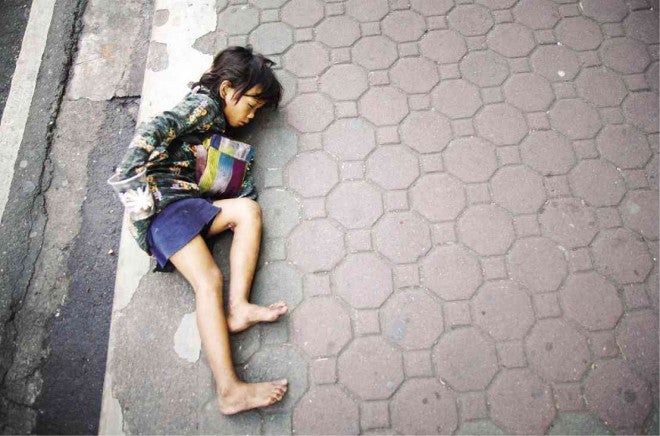 A Badjao girl sleeps on the sidewalk of Session Road in Baguio City, while her mother (not seen in the photo) watches from the opposite of the street. Richard Balonglong/Inquirer Northern Luzon

BAGUIO CITY—“Ina” (old mother) spends her mornings here, persuading strangers to give her P5. Her dialect is unfamiliar to new generations of city folk, so the old woman grins amiably while she flashes a coin to express what she wants.

This holiday season, however, Ina said she had little to smile about. “I have no more coins. They now give [coins] to those Badjao,” she said.

For years now, Badjao families, who come from Mindanao, have been frequenting Baguio with their children, although they are not Ina’s only competition during the holidays.

But the implied rivalry between local beggars and the Badjao families has aroused the curiosity of scholars and the Department of Social Welfare and Development (DSWD) because they are indigenous Filipino groups competing for alms.

About 30 old Cordillera men and women either beg on the streets or offer themselves to tourists and photographers as “exotic subjects” for a fee, city government records showed.

Local social workers are certain they do so because begging has been a lucrative trade since the 1960s, when accounts first surfaced about men and women in traditional Cordillera attire who “carol” for coins along Metro Manila streets.

However, DSWD programs to discourage mendicancy have been restrained by Republic Act No. 8371, the Indigenous Peoples Rights Act (Ipra) of 1997, said Betty Fangasan, city social welfare and development officer.

For example, social workers once collected Badjao children, some no older than 4 years old, who faced danger when they ask for coins from motorists.

Fangasan said the social workers advised their parents that they could go about their business, provided they leave the children under the city’s care for their protection.

On the surface, the transient Badjao beggars should not have been a problem for Baguio, which has dealt with local beggars for years.

Cordilleran beggars have not multiplied as fast as they could have because their towns and families shun members of their tribes who beg to make a living, said Fangasan.

Many of the elderly beggars originate from a province in the Cordillera region, said Fangasan.

She said their numbers have dwindled as more educated members of their families discourage the practice. “No one begs in that province because it would be shameful and everyone knows you there,” she said.

There are no records of Cordilleran beggars before World War II but the summer capital enforced an anti-vagrancy ordinance during that period which suggested that panhandlers may have emerged then, said anthropologist June Prill-Brett, professor emeritus of the College of Social Sciences at the University of the Philippines Baguio.

“If you have no business in the city … if you have no home here, you were put on the next bus and sent back to where you came from. This prevented squatters, thieves and undesirables from entering [Baguio],” said Brett.

“If there were [Cordilleran] beggars at the time, they could not enter Baguio so they went to the lowlands,” she said.

Most of the Cordilleran beggars who prod strangers with their canes are old women, who may have taken this odd livelihood to assert to their families that they were old but not useless, Fangasan said.

But Ipra had changed the dynamics about indigenous Filipinos, she said. The law grants many families in the Cordillera the opportunity to apply or acquire titles to their ancestral lands.

Asked about this provision, Fangasan said it made people “stop believing the [Cordilleran] beggars are destitute and it helps us discourage people from giving them alms.”

But while community shame worked on the elderly, ostracism was not an instrument the Cordillera could wield easily to stop Badjao families from begging, Fangasan said.

She said it was uncertain whether the Badjao were aware about their indigenous rights or have ancestral domains to which they could reclaim when they return to their provinces in Mindanao.

“We don’t know how to communicate with them, despite help from our migrants from Mindanao,” Fangasan said.

Like the Cordilleran beggars, the Badjao provide dubious personal information to mislead social workers, she said.

“My first case as a social worker in 1982 was to deal with the old beggars from my province, so I thought I could reach out to them. But they gave me names that turned out to mean grass or trees that grow in the mountains. The Badjao give us different names, too, each time they return. But we have since filed dossiers on them so we would not be fooled again,” she said.

The Badjao are peaceful coastal dwellers, “who are poor and uneducated because of their nomadic nature,” said Anton Mari Lim, co-founder of the Yellow Boat of Hope Foundation Philippines, which has been providing education and fishing boats to Badjao families who have relocated to Quezon province and Zamboanga City.

Because of the communication gaps, Baguio’s sole program for the itinerant Badjao is to collect them, feed them and pay their bus fare when they are asked to leave Baguio, said Nelly Ayochok, a Baguio social worker.

“Simply rounding them up from the streets and throwing them back where they came from, will not solve the problem,” Lim said in an e-mail letter to the Inquirer.

“You have to educate them by making it easy for them to stay in school. To achieve that, the parents’ livelihood should be addressed, too,” he said.

Perla Villanueva, who operates the God’s Love for the Indigents Ministry in Pampanga, said the Badjao are “stateless” and begging had become the more direct way for the nomadic families to access goods and services in mainstream society.

Baguio and other cities and towns visited by Badjao families “can significantly change their fate by adopting them as constituents,” so they can receive the same social services to which a typical Baguio resident is entitled.

Fangasan said many have tried these strategies but failed.

“In Agoo [town in La Union], an evangelist’s family hired seven Badjao families to fish at their seaside property, hoping to improve their lot and educate the children. After a week, the families abandoned their work and disappeared. They were located again in Urdaneta City [in Pangasinan] and they were begging,” she said.