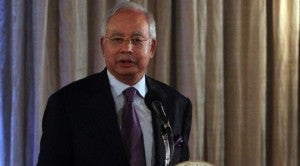 Malaysian Prime Minister Najib Tun Razak said on his official Twitter account that his country is “ready to help.”

“Very sad to hear that AirAsia Indonesia QZ8501 is missing. My thoughts are with the families. Malaysia stands ready to help,” Razak said.

AirAsia, a low-cost airline company, is based in Malaysia.

Meanwhile, Singapore Prime Minister Lee Hsien Loong sympathized with the families of the passengers in the said AirAsia flight, adding that two Singaporean aircrafts are on stand-by to help in search and rescue efforts.

AirAsia flight QZ8501, carrying 155 passengers and seven crew members, took off from Juanda International Airport in Surabaya, Indonesia at 5:35 a.m (Surabaya local time) and was set to arrive in Singapore at 8:30 a.m. However, at 7:24 a.m, it lost contact with air traffic control on the ground.

AirAsia reported that the plane’s captain requested for deviation from its original flight plan due to bad weather.

AirAsia plane with 162 on board missing in Indonesia