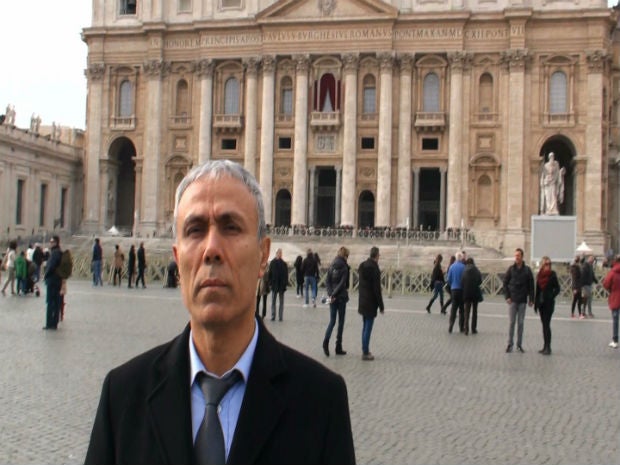 In this image taken from a video provided by Adnkronos International, Ali Agca stands in front of St. Peter’s Basilica at the Vatican, Saturday, Dec. 27, 2014. The Turkish gunman who shot and wounded John Paul II in 1981 laid white flowers Saturday on the saint’s tomb in St. Peter’s Basilica, Vatican officials said. AP

The latest highly publicized act of contrition by Agca came 31 years to the day after John Paul visited him in prison in Rome to forgive him for the 1981 shooting that nearly killed the leader of the world’s Catholics.

Agca, then 23, shot the pope twice from close range in St Peter’s Square, one bullet passing through his abdomen and another narrowly missing his heart.

He arrived back in Rome unexpectedly on Saturday and presented himself to police to declare his intention to lay the flowers.

A Vatican spokesperson, Rev. Ciro Benedettini, said there were no legal matters pending against Agca in the Vatican and he was free to visit.

“I felt the need to make this gesture,” Agca told police, according to Italian media who had been tipped off in advance about his visit.

Granted authorization to pay his respects under a discreet police escort, Agca was filmed by the ADNKronos news agency murmuring a prayer at the side of the tomb after he had deposited his bouquet of white roses.

“A thousands thanks holiness,” he said in Italian. “This is a miracle that goes on. The mystery of Fatima goes on. Long live Jesus Christ!”

Agca requested a meeting with Pope Francis when the current pontiff visited Turkey last month. That was declined as was a fresh request for an audience this weekend in Rome.

“He has put flowers on the tomb of John Paul II. I think that is enough,” Francis’s spokesman, Federico Lombardi, told La Repubblica.

The motive for Agca’s 1981 attack on the pope remains a mystery. He served nearly three decades in prisons in Italy and Turkey and is widely considered to be mentally disturbed.

At the time of the assassination attempt, Agca was on the run from the Turkish authorities over a string of crimes, including the murder of a journalist, and his links to the far-right Grey Wolves movement.

He initially testified that he had acted alone but later claimed the Bulgarian and Soviet secret services had orchestrated the attempted murder because of the Polish pope’s anti-communist stance.