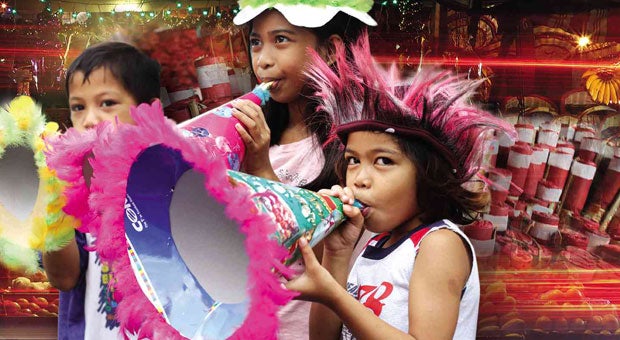 SAFE REVELRY Quezon City authorities are encouraging children to use horns as safe alternatives to firecrackers during the days leading up to the New Year’s Eve revelry in this composite photo that also shows city street scenes of selling firecrackers in Legazpi City in Albay province and round fruits in San Andres, Manila. MARIANNE BERMUDEZ/EDWIN BACASMAS/MARK ALVIC ESPLANA/INQUIRER SOUTHERN LUZON

They never learn. Or if they do, it’s because they have lost a finger or two.

And here we are again, counting. It’s still three days before New Year’s Eve and the Department of Health (DOH) has already recorded 113 cases of firecracker injuries across the country.

The count includes a 5-year-old boy from San Mateo town, Rizal province, who ate a sparkler, mistaking it for candy.

The boy from Cebu lost his right hand in the explosion of a still unknown firecracker, while the boy from Manila lost his left hand when the “piccolo” he lighted with a matchstick exploded.

When gathered and lighted together, piccolo—small, colorful and cheap—can produce a big bang, like the “bawang,” that garlic-size bulb of tightly packed powder that explodes like a grenade.

The DOH considers piccolo one of the most dangerous firecrackers available in the country.

According to the DOH firecracker injury registry, which started on Dec. 21, the majority of the cases—75, or 67 percent—were injuries from piccolo explosions.

While the national tally was 86 cases, or 43 percent, lower compared with the number of injuries recorded from Dec. 21 to New Year’s Eve last year, the DOH said the trend was unacceptable, especially as some of the injuries had permanent consequences.

“Every life is important,” acting Health Secretary Janette Garin said in a statement on Saturday. “The lower number of cases only encourages [the] DOH to intensify its campaign to stop the use of firecrackers in merrymaking to welcome the new year.”

In its 6 a.m. firecracker injury registry update on Saturday, the DOH-National Epidemiology Center said the national tally was 50 cases (31 percent) lower than the five-year (2009-2013) average.

Metro Manila had 39 percent, or 44 of the total number of cases, with Manila having the most cases at 19, followed by Pasig, with 8, and Las Piñas and Pasay City, three each.

Causing the injuries, besides piccolo, were the firecrackers called “five-star” and “camara,” and the canon-like device called “boga.”

In Bicol, health officials said firecracker injuries across the region had risen nearly 200 percent even before the New Year’s Eve revelry could start.

Dr. Evy Sarmiento, coordinator of the Violence and Injury Prevention Program at the regional office of the health department, said at least 21 people were hurt in playing with firecrackers between Dec. 21 and Dec. 25, an increase of 171 percent from 14 in the same period last year.

A survey taken by the health department in the region showed that most of the injuries were caused by the piccolo.

Sarmiento said all the victims suffered hand injuries and were discharged after receiving treatment in hospitals.

Albay hopes to see fewer cases after a police crackdown on vendors of illegal firecrackers in the cities of Legazpi and Tabaco, and the towns of Guinobatan and Polangui on Saturday.

Senior Supt. Marlo Meneses, Albay police director, said charges were being prepared for filing against the vendors. With reports from Michael B. Jaucian and April Mier, Inquirer Southern Luzon