Bounty back in village after ‘Sendong’ 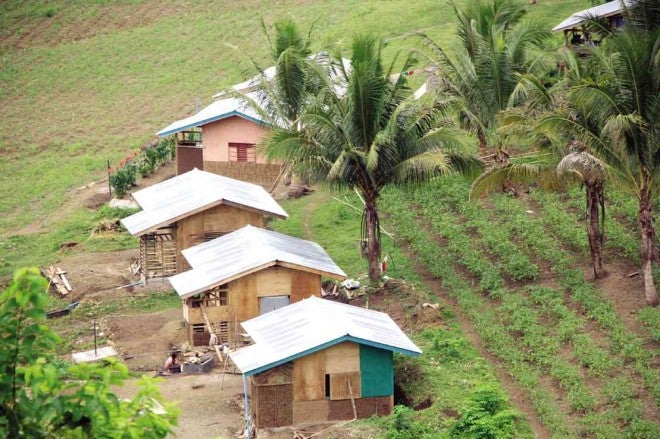 Gutom residents started building back better after Tropical Storm “Sendong” by relocating their community to a plateau safe from possible floodwaters through the swelling of Kapai River due to heavy rains. This decision spared them the wrath of Typhoon “Pablo” less than a year later. PHOTOS COURTESY OF PAILIG DEVELOPMENT FOUNDATION

ILIGAN CITY, Philippines—Right after her community was ravaged by the weak but rain-heavy Typhoon “Sendong” on Dec. 17, 2011, Omie Pamanay had to walk for an hour to line up for donated food that would last her family for a day.

The walk back home, along some stretches of treacherous steep slopes, was made meaningful by the weight of a plastic bag containing a kilo of rice, some cans of sardines and a few packs of instant noodles.

For more than three months, this had been a daily ritual for Pamanay and 29 other families of Sitio Gutom in Iligan City’s hinterland Barangay Lanipao, until they thought of sparing some legumes from their food rations and setting these aside for planting instead of cooking.

This turned out to be the big idea that pump-primed the community’s recovery and drove its impressive journey of building back better from Sendong’s wrath with minimal help from the government.

“At first, we shied away from the food aid line. Before that disaster, we had been feeding ourselves from our own labor and we could not stand the thought that we begged for food,” Pamanay narrated in Visayan.

But circumstances drove them to the food distribution center in nearby Barangay Mandulog, then a hub of aid delivery.

Sendong laid a siege of floodwater that carried mud and logs over a large swath of Iligan’s urban center, killing hundreds of people and eroding the houses, crops and livestock in hinterland communities, including Gutom, though it was a consolation no one died there.

Farmer Lody Bansil, 42, a former councilman of Lanipao, said the raging floodwaters washed away the fields in Gutom and left nothing to scrape up for food.

Roads and bridges that once connected these remote communities to the urban area were destroyed, effectively cutting off emergency food supply.

Immediately after the storm, Bansil said, 30 families in Gutom were provided food by residents of neighboring Pugaan village, way up on the steep hills, which was less affected by the onslaught of the torrential rains.

“When we started lining up for food in Mandulog, we had to argue that we were also rightful recipients of aid because we were victims of Sendong even though we are not from that barangay,” Pamanay said.

The monotonous life of aid dependency had almost eaten into the psyche of Pamanay and the other families, until an opportunity came to break from it.

By then, they had resettled on a plateau to avoid another life-and-death bout with flash floods. This was upon the advice of nongovernment organizations, which supplied them with housing materials.

The survivors set aside a portion of their monggo ration for planting. “Saving some monggo was no small idea, after all. It was a display of strong determination to overturn their tragic situation,” said Greg Tacbas, a sustainable agriculture specialist with Pailig Development Foundation Inc. (PDFI).

“This was really the turning point in Sitio Gutom’s story of recovery from Sendong,” Tacbas stressed. His group has been assisting the community in livelihood-enhancement and post-disaster initiatives.

One thing led to another. The villagers then turned their efforts to addressing physical access to and from the community.

By March 2012, with some fund assistance from the barangay government and PDFI, residents volunteered to work on opening and paving a trail that could accommodate a habal-habal (motorbike).

The 8-kilometer path that mostly snakes along a riverbank provides easier mobility toward Mandulog and on to the city center. Transport of aid also became easier.

Soon, the residents took interest again on the coconut trees left standing in the community. It was their main source of living. Whatever income the families squeezed out of the remaining nuts, either through copra or as husked pieces, brought them nearer to self-sustenance.

Before, selling copra was physically exhausting. From Gutom, a 60-kilo sack of copra had to be carried to Mandulog by a single person across stretches of steep slopes. Because of the treacherous terrain, the walk took more than an hour and the transport cost was high.

“Horses couldn’t even make it. That’s how difficult the road was—if you’d call it a road,” Bansil joked in Visayan.

Spanning some 500 hectares, Gutom is a landscape of valley and plateau hemmed between two mountains. Its considerable forest cover is what survived from the brisk logging activities in the area from the 1950s to the 1970s.

The main residents are Maranao of Higaonon ancestry. And most belong to the extended Bansil family by blood or affinity. The population has grown through intermarriages with families from nearby villages.

Prior to Sendong, Gutom was connected to the Lanipao village center through a pedestrian bridge. It could also be reached through bamboo raft across the 30-meter-wide Kapai River. The residents traded in Mandulog, where their products commanded higher prices.

Until 2009, residents got drinking water from the river, making them vulnerable to water-borne diseases. “Water collected in the morning was used only in the afternoon to give time for small particles to settle,” Bansil said.

These weaned Gutom from its dependence on the vagaries of the copra market. But then, Sendong came. 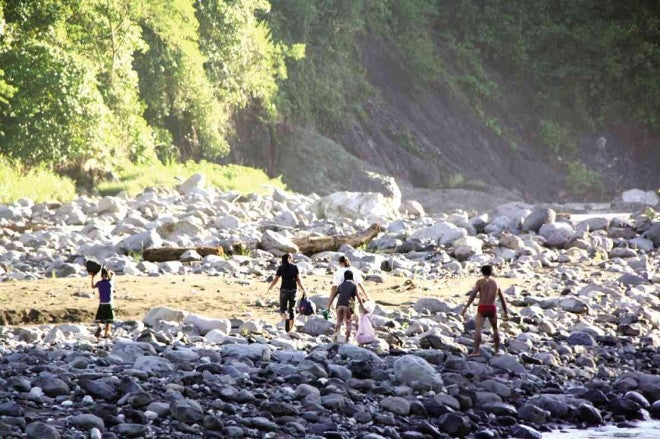 Rocks and boulders replaced what were once lush gardens and coconut farms in Gutom, a hinterland community in Iligan City, that was ravaged by Tropical Storm “Sendong” three years ago.

With PDFI help, the destroyed water pumping facility was restored, only to be washed away by Typhoon “Pablo” less than a year later. By then, Gutom folk were better at dealing with the adversity. It took less time to rebuild the facilities and jump-start farm production.

Today, with improved facilities, some 300 ha of the plain is reached by irrigation water. “We no longer buy rice at the city center,” Bansil said with pride.

Tacbas said that compared with conditions just before Sendong changed everything, the goats that now roamed the grasslands were bigger and the chickens at daybreak were noisier.

No one can tell exactly how the community got its name, which is Visayan for “hungry” or “hunger.” But Gutom’s rise from the ruins caused by a devastating storm belies its name.

“Looking back now, Gutom residents have shown a knack for optimizing every opportunity that came their way. This could be the magic waiting for a spark back in 2012, when they were left destitute by Sendong,” Tacbas noted.