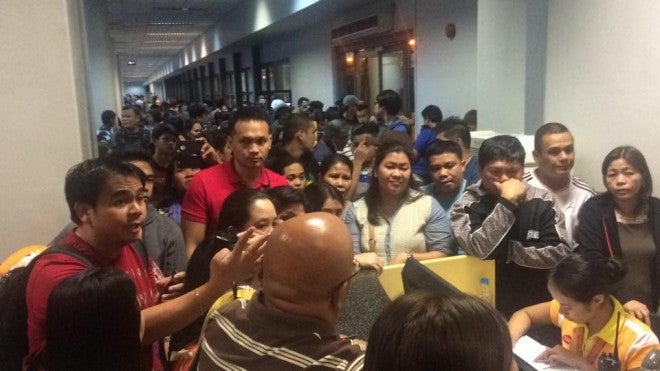 Long lines of passengers, delayed and canceled flights, people sitting on stools and on floors, and an Israeli man yelling at airport personnel demanding they pay him back for their incompetence.

This was how Ninoy Aquino International Airport Terminal 3 (Naia 3)—the premier gateway of the capital—at times looked on Christmas Day and the day after.

Particularly annoyed were the passengers supposed to spend their holidays in the provinces—and unable to fly out.

As of Friday noon, at least 14 complaints had been lodged at the Civil Aeronautics Board (CAB) counter at Naia 3.

The complainants were passengers of Cebu Pacific Air who were not able to board their flights owing to the long queues at the airline’s check-in counters.

One of the complainants at the CAB was a foreigner who identified himself as Yinon Tzafrir from Israel. He was supposed to spend his holidays on Siargao Island in Surigao del Norte province with friends.

In a fit of rage after he was told he would be reassigned to another flight, the Israeli kept shouting at airline personnel, blaming Philippine authorities for their supposed incompetence, said a CAB personnel who witnessed the incident.

Tension ran high when more passengers were not processed in time for their flights.

“After waiting in line for three hours to check in my baggage, the flight left. I demand they pay me back for the days of accommodation, including taxi, hotels and food because I could not go to Siargao,” the Israeli said in his complaint.

Another complainant, Jennifer Dominguez, said she and the other passengers were already at the airport at 4:30 a.m. for the 6:30 a.m. Cebu Pacific flight to Boracay.

But before their departure, airline personnel told them they had to rebook their flights for a later schedule.

“The check-in counter was very crowded and without any order,” she said.

Domingez and her companions chose to book their flights on another airline, demanding a full refund from Cebu Pacific.

In an interview, Lina blamed the delays and congestion on Cebu Pacific’s unmanned counters.

“There were a lot of people and the check-in processing of the airline was so slow so flights had been delayed and some passengers were not able to board their scheduled flights,” he said.

Lina said Cebu Pacific had 26 counters to process check-in passengers at the Naia 3 but only 20 were open.

“They don’t have enough personnel to accommodate the influx of passengers. We thus requested the airline management to augment its staff. We also opened another bay of check-in counters for them,” Lina said.

By noon Friday, the situation at Naia 3 had normalized after the flood of people subsided and Cebu Pacific brought in more personnel from its other offices.

The delayed flights, however, created a domino effect. “One chain reaction is the cancellation of flights at sundown due to certain airports’ sunset limitation,” Lina said.

He explained that other airports, like those in Tagbilaran City and Caticlan in Aklan province, were not equipped with nighttime navigational aids so that planes could not land and take off after sundown.

Since Dec. 24, more than 300 departing and arriving flights at Naia 3 had been delayed, according to Lina.

Many airline passengers sat on stools and even on the floor on Friday after arriving 5 to 10 hours before their flights.

In a statement, Cebu Pacific said: “The situation came about due to insufficient manpower at the airport earlier today.”

The airline mobilized additional personnel from its service provider and tapped others from its international check-in counters to assist passengers on domestic flights.

“We apologize for this inconvenience. We know the importance of the season to our passengers and wish them the best during the rest of the holidays,” Cebu Pacific said.