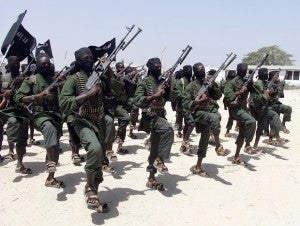 Hundreds of newly trained al-Shabab fighters perform military exercises in the Lafofe area some 18 km south of Mogadishu in Somalia in this Feb. 17, 2011, file photo, . AP

NAIROBI, Kenya—Gunmen attacked the African Union’s main base in the Somali capital of Mogadishu on Thursday leading to an exchange of gunfire between militants and soldiers that killed at least nine people, including three soldiers, an official with the mission in Somalia said.

Three militants were captured during the Christmas Day lunch hour attack on the African Union Mission to Somalia’s (Amisom) Halane base camp, the group said in a statement.

Amisom said the gunmen, some of whom were disguised in Somali National Army uniforms, breached the base camp and attempted to gain access to critical infrastructure, during which five of them were killed and three others captured. Three Amisom soldiers and a civilian contractor unfortunately lost their lives, Amisom said.

Somali extremist group al-Shabab claimed responsibility for the attack and said they were targeting a Christmas party at the base, which also houses Western embassies and UN offices.

At least eight men entered the AU base near the Mogadishu airport, AU Mission in Somalia spokesman Colonel Ali Aden Houmed told The Associated Press. He said the base was now calm.

“Our forces shot dead three of them, two detonated themselves near a fuel depot,” he said.

“An investigation is underway on how they entered the base,” he said, adding that the attack was launched at a time when people were busy at lunch.

AU troops are bolstering Somalia’s weak government against an insurgency from the al-Qaida-linked al-Shabab.

In an audio posted on the militants’ website, Al-Shabab spokesman Sheikh Ali Mohamud Rage said the attack on the AU base was carried out in retaliation for the killing of the group’s leader Ahmed Abdi Godane in a US airstrike this year.

In the attack, Rage claimed they killed 14 AU soldiers and four foreigners, but the group habitually exaggerates the number of people it kills.

This is not the first time al-Shabab has attacked the African Union. In 2011 al-Shabab gunmen disguised as soldiers attacked an African Union base in Mogadishu sparking a two-hour gunfight that left at least ten people dead. Earlier this month, a suicide bomber rammed his vehicle into a UN convoy near Mogadishu’s airport, killing three people just after Somalia’s president entered the protected airport area. No UN staff were killed or injured, said the UN.

The attacks underscore the militants’ ability to carry out complex and deadly operations frequently even after AU troops forced them from strongholds.

Al-Shabab controlled much of Mogadishu during the years 2007 to 2011, but was pushed out of Somalia’s capital city by African Union forces. The militants then also lost control of the port city of Kismayo, crippling one of its major income generators.

Gunfire and explosions could be heard earlier Thursday after militants likely entered the base, said Mohamed Abdi, a policeman at the capital’s airport, which shares a fence with the AU base.

Ali Abdullahi, who lives near the airport, said AU troops took up positions inside. All roads leading to the airport were sealed following the shootout, and journalists were also kept away.

The United Nations representative to Somalia, Nicholas Kay, condemned the attack on Twitter.

Somalia has been trying to rebuild following years of political instability and civil strife since 1991, when the dictator Siad Barre was ousted from power.

The United States and the UN, among others, have warned that political infighting in Somalia is putting at risk the security gains made in the country. The federal government remains weak and ineffective and wields little power outside the capital Mogadishu.

US strike may have killed Somali extremist group leader