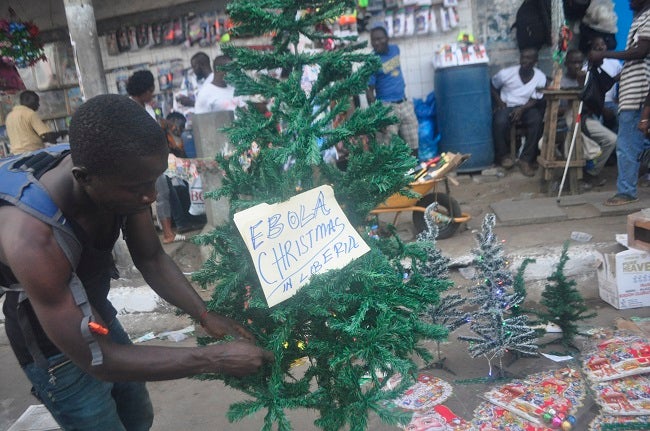 A Liberian man arranges a Christmas tree at a shop in Monrovia, Liberia, Wednesday, Dec. 24, 2014. The deadly Ebola epidemic in Sierra Leone means no festive parties at the beach, no carolers singing at night. Authorities this year have banned any activities that could further the spread of the highly contagious virus now blamed for killing more than 7,000 people in West Africa over the past year. AP

MONROVIA, Liberia — The Ebola epidemic has cast a dark shadow over Christmas this year in Liberia, where small businesses are especially feeling the pinch.

“This is the worst Christmas we have ever seen,” said Isaac G. Chea, a trader. “Because of the Ebola crisis… people don’t want to come in the market, there where people gather; touching each other” for fear of contracting the disease.

Monrovia residents cannot remember a more morose Christmas period since the west African country’s back-to-back civil wars, which claimed some 250,000 lives between 1989 and 2003.

The Ebola crisis, which has seen more than 3,000 Liberians lose their lives, prompted President Ellen Johnson Sirleaf to cancel a traditional event in which she invites children to her office to give them Christmas presents.

Some youths and children could be seen engaging in another Christmas tradition — putting on disguises and dancing in the streets to raise pocket money to buy presents with – but the usual verve was lacking.

More prominent were anti-Ebola teams plying the streets of the capital and suburbs urging people to be particularly vigilant against the disease during the holidays.

Samuel Streete, an engineer, told AFP: “I told my family, I told my kids that they are not going out. No celebration, we will stay home and watch movies all day because of Ebola.”

Angie Gardea, a cosmetician, said business had fallen off. “Customers are not really pouring in like before, so today I could not buy my children Christmas clothes.”

Nor has Sunny Fassiah, 53, bought any Christmas presents this year. “You celebrate only when you are healthy,” he said. “Ebola is still here, we have to keep the biggest portion of the money for preventive measures and preventive medicine.”

Posters aimed at raising awareness about preventing the spread of Ebola were far more prominent than Christmas decorations in the capital of the impoverished nation.

The death toll in Liberia stands at 3,384, with 7,862 cases, according to the latest World Health Organization figures, making it the country with the most fatalities in the current outbreak, followed by Sierra Leone and Guinea.

The killer disease in the year-old outbreak has claimed 7,588 lives overall so far, almost all in the three contiguous countries.

In a small sign that Liberia is at last turning the corner, it was finally able on Saturday to hold Senate elections that had been postponed twice because of the epidemic.

But Streete, the engineer, said that even if containment efforts seemed to be bearing fruit, Liberians should not “be wild, going around and celebrating like our tradition; no! Things have to be different for this Christmas. That’s the main thing.”