MANILA, Philippines—Rebook or cancel flights, or just “go with the inconvenience.”

A Manila International Airport Authority official laid out these options to individuals who have scheduled departing flights in the country’s main airport on the arrival and departure dates of Pope Francis in January 2015.

Alvin Candelaria, officer-in-charge of the airport operations unit of MIAA, made the suggestion following the announcement of the closure of several roads around the Ninoy Aquino International Airport complex during specific hours on Jan. 15, the Pope’s arrival, and on Jan. 19, the Pope’s departure. 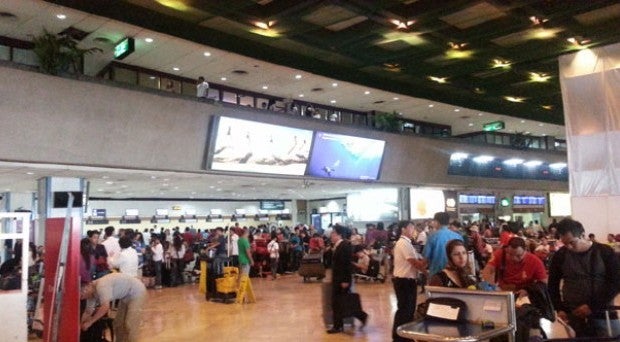 Ma. Consuelo Bungag, officer in charge of the public affairs division of MIAA, has said that on the first day, the “whole stretch of Sales Avenue all the way to Andrews Avenue; Domestic Road all the way to Park and Fly; and MIA Road going to Roxas Boulevard” will be closed from 3 p.m. to 7 p.m.

On the second day, the same roads will be closed from 7 a.m. to 10 a.m., Bungag has reminded the public.

“So what do we expect to happen? (Some) Naia terminals can only be accessed via South Superhighway through Bicutan, Alabang and Sucat Road,” she said in a press conference at the Naia Terminal 1 boardroom on Tuesday.

Although accessing Naia Terminals 1 and 2 would not be a problem, she said 3 and 4 would be “isolated” as a result of the closures.

To enable travelers to get to these last two terminals on those days, she said airport authorities had designated Naia Terminal 1 Parking B as a “jump-off point.”

“From (this) staging area, (those travelers) will be brought to Terminals 3 and 4 via shuttle buses owned by Naia, and these will pass by the air side because that’s the only way we can get them to the two terminals,” Bungag said.

She added the “lobby areas”—both the departure and arrival ones—of Terminal 3 “will be closed to nonpassengers” on those two days.

She said this has been meant to accommodate the “influx of passengers and those who may find themselves inside the terminal once the road closures are implemented (maaaring maabutan ng mga road closure sa loob ng terminal).”

“That’s why we are telling (the passengers) this as early as now … So … they have a chance to rebook, or refund or cancel their flights,” Candelaria said, adding they could also opt to “go with the inconvenience” if they wanted.

Should they decide to bear with the inconvenience, Bungag advised travelers to go to the airport “five to six hours” ahead of their scheduled flight, instead of following the usual three-hours-before norm.

Authorities have said that apart from the road closures, they will implement several rules for aircraft in all terminals in Naia on those two dates, and on January 17, when the Pope would go to and arrive from Tacloban.

On January 15, the entire airport will be closed to arriving aircraft from 2 p.m. to 7 p.m., according to Candelaria.

On the same day, from 5:15 p.m. to 6:15 p.m., the landing and takeoff on runways and other “ground movement in the airport will be suspended,” Candelaria said.

“It shouldn’t be noisy while the Pope is coming down (the plane),” he said.

Here are other rules on aircraft operations at the Naia during Pope Francis’ visit, according to Candelaria:

According to Bungag, departure flights “will continue as scheduled on those hours not affected by the road closures.”

Candelaria said airlines have already been advised about the airport situation on those dates.