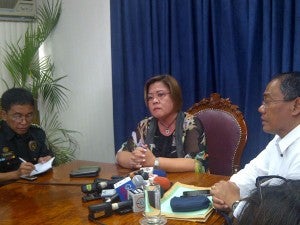 Bucayu helped organize successive raids led by De Lima on the NBP, but came under fire just same because the illegal activities in the country’s largest prison persisted on his watch.

“The President is leaving it up to Secretary Leila de Lima to decide on the matter,” Communications Secretary Herminio Coloma Jr. told reporters in a phone-patch interview on Thursday.

Bucayu said the removal of the three top officials was only the beginning, with other prison officers also under investigation.

“We will see who else, if any, has to be sanctioned,” he said.

“At this point I’m holding judgment on him because, in the first place, he was with us in the planning and during the raid conducted. At this point, he is not included among those being investigated,” De Lima said after the raids.

The first raid on Dec. 15 yielded guns, high-end appliances, wads of cash, routers and even sex toys in the quarters of several high-profile inmates, who were apparently receiving special treatment in prison.

“Based on our study, their removal from the NBP would validate the combined reports of anti-illegal drugs agency that the inmates control the narcotics industry in the country,” De Lima said.

The sacking of the three prison officials and the transfer of the VIP inmates began a revamp at the NBP. What else follows and when are unknown.

Finish it in 18 months

Ilocos Norte Rep. Rodolfo Fariñas, vice chair of the committee on justice of the House of Representatives, wants De Lima to complete the revamp in 18 months.

After sacking the prisons chief, it behooves De Lima to totally clean up the NBP before the end of President Aquino’s term, Fariñas said.

De Lima is now training her guns on Rabo and the jail guards who have been ordered to explain why they tolerated the inmates’ luxury quarters.

De Lima said she planned to impose preventive suspensions against those under investigation.

Fariñas said: “I have to agree with her (De Lima) on Bucayu as that system has been there for a long time and would need drastic measures to dismantle it.

“Since Bucayu seems to enjoy the trust and confidence of the secretary, who in turn is trusted by the President, they should effect the changes within the remaining 18 months of the Aquino administration.”

The House committee on justice will conduct an inquiry into irregularities in the NBP when the lawmakers return from their Christmas break next month.

Iloilo Rep. Niel Tupas Jr., the committee chair, wants justice and prisons officials to explain why the excesses in the NBP have worsened despite several inquiries conducted by the House in the last three years.

Akbayan Rep. Walden Bello said he found it “disturbing” that the situation has worsened during the watch of De Lima, who should take command responsibly for the scandal, which he described as “crazier than fiction.”