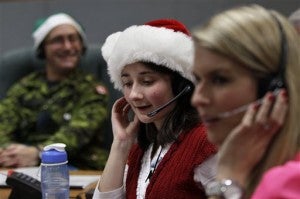 A volunteer takes phone calls from children asking where Santa is and when he will deliver presents to their house during the annual Norad Tracks Santa Operation in this Dec. 24, 2012, file photo. AP

COLORADO SPRINGS, Colorado—Volunteers at the North American Aerospace Defense Command (Norad) are pretending to monitor Santa Claus as he makes his storybook Christmas Eve flight. So far, Norad says it used the heat signature from Rudolph’s nose to “track” St. Nick over spots ranging from Australia to South America.

Technology and social media have become an important part of the US and Canadian military tradition, and Norad Tracks Santa has already attracted around 1.6 million Facebook “likes.”

The volunteers on Wednesday were answering phone calls and emails from children and posting updates on the mythical journey to Facebook, Twitter and www.NORADSanta.org.

The 59-year-old program now has a control center at Peterson Air Force Base in Colorado Springs, and it generates enough statistics, anecdotes and stories to fill a sleigh:

— HOW IT WORKS: Kids can email [email protected] on Christmas Eve. A volunteer checks a big-screen computer monitor and passes along Santa’s location. Updates are posted at noradsanta.org, facebook.com/noradsanta and twitter.com/NoradSanta. The volunteers will keep answering questions through 3 a.m. (1000 GMT) on Christmas Day.

— LATEST MOVEMENTS: Norad says it has most recently spotted Santa over Guyana in South America and that he’s delivered more than 4 billion gifts so far.

— SO FAR THIS YEAR: Norad Tracks Santa had around 1.6 million Facebook likes as of Wednesday evening. Twitter followers stood at around 155,000. Initial website visits weren’t available yet.

— AND LAST YEAR: The website attracted more than 19.5 million unique visitors in December, the Facebook page drew 1.45 million “likes” and the Twitter feed had 146,000 followers. Volunteers took 117,000 phone calls and answered 9,600 emails. Another 800 inquiries came in via OnStar. The Facebook likes, Twitter followers, phone calls and OnStar questions were all record highs for Norad Tracks Santa.

— GROWING FAST: Visits to the website, which was launched in 1997, peaked at 22.3 million in 2012 before dropping to about 19.6 million last year. The reason isn’t clear, but Major Beth Castro, a Norad spokeswoman, said the website might not have been able to accommodate all the traffic.

— NEW THIS YEAR: The website has an animated elf named Radar. “Radar” was the favorite in a vote on Facebook, beating out “Daron,” which is Norad spelled backward, and “Echo L. Foxtrot,” which uses the military phonetic alphabet to spell out “elf.” Norad Tracks Santa also has a new mobile version of its website for smartphones.

— WHAT’S NORAD? The joint US-Canada command is responsible for defending the skies and monitoring the sea approaches for both nations. Its control room was originally inside Cheyenne Mountain in Colorado Springs in a shelter designed to withstand a nuclear attack. The control room is now at Peterson Air Force Base, also in Colorado Springs.