Ona: Loss of Aquino’s confidence made me quit | Inquirer News

Ona: Loss of Aquino’s confidence made me quit

MANILA, Philippines—President Benigno Aquino III’s loss of confidence in Enrique Ona’s leadership was what prompted the former health secretary to quit his post and not the investigation of his alleged involvement in the questionable procurement of vaccines worth P833 million in 2012.

“As an alter ego of the President, I had to offer my resignation [after losing the President’s vote of confidence]. However, I am grateful for the opportunity and huge privilege given to me by the President,’’ Ona told reporters in a press conference Tuesday.

A source close to the former health secretary told the Philippine Daily Inquirer that Ona announced his resignation after Mr. Aquino revealed in Busan, Korea, that the health secretary would face more charges on top of the controversy regarding the purchase of anti-pneumonia vaccines, which also involved Assistant Secretary Eric Tayag and Acting Health Secretary Janette Garin. 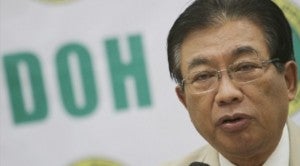 “The pronouncements of the President that Secretary Enrique Ona is being made to answer not just for issues concerning the government’s vaccination program, but also for three to four other matters were too much for him and it’s obvious that the President had lost confidence in him,” said the source, who asked not to be named.

In his resignation letter dated Nov. 27, a copy of which was obtained by the Inquirer, Ona cited old age as the reason for relinquishing his post.

He said he has reached an age where he should spend more time with his family and “take a less demanding task.”

Ona said he was not able to talk to the President after he went on a month-long “medical leave” in October, supposedly after experiencing severe allergic reaction from the use of a damaging hair dye. It turned out to be the least of his concerns.

Ona maintained that he did not earn from any project of the Department of Health (DOH).

“Categorically, I could say I did not receive any centavo from projects of the DOH. Personally, no one even tried to bribe me. However, I could not speak for others, I am also trying to know if [someone committed an irregularity that escaped my notice],’’ Ona said.

He also said that contrary to some reports, the World Health Organization (WHO) did not recommend the 13-valent pneumococcal conjugate vaccine, also called PCV 13, as a more cost-effective alternative to Ona’s choice of PCV 10.

The recommendation merely stated “that both vaccines are cost-effective,” Ona said.

The WHO Manila had also denied that they filed a complaint against Ona for purchasing the PCV 10, instead of the PCV 13.

Ona said he did not have any involvement in any “anomalous and irregular transactions in the procurement of PCV vaccines in 2012 and 2014.”

Ona admitted that there were two “competing opinions within the DOH, each one having their own rationale.’’

He said that Garin and Tayag, both linked to the anomaly, “have certain differences and disagreements.” However, Ona said he agreed with Tayag.

But he said he has taken full responsibility for his decision as the head of the health department.

“I used my medical value judgment, which was well within my discretionary powers as secretary of health,” Ona said.

He also denied allegations that a pharmaceutical company had influenced his decision in the purchase of the vaccines.

“My intention in choosing PCV 10 in 2012 was to be able to cover for more Filipinos and realize savings of P231 million or an additional 124,000 children vaccinated,” he said.

Ona also clarified that contrary to reports, he did not change the procurement of PCV 13 to PCV 10.

“What we did was to modify the procurement to generic PCV instead of the specific PCV 13. This move was lawful and without anomaly or irregularity,” he said.

Ona added that his administration has done the groundwork for universal health structure.

“The next one should be someone who understands what we have started and will implement what is already in place,” he said of the ideal health secretary.

Ona said that by 2015, the country’s health preventive program would become comparable to that of Taiwan and Singapore, where everyone has the chance to seek medical aid.

President Aquino has yet to appoint a replacement for Ona.

In the same press briefing, Ona said he had already given his statement to the National Bureau of Investigation.

He said the Philippine government has saved over P200-million for the purchase of PCV 10 by his department in 2012.

“The primary objective in procuring PCV 10 instead of 13 was to enable the DOH to optimize limited government resources and to have the most number of infant beneficiaries but still achieve the best possible health outcomes,” he said.

“As the head of the National Drug Policy Office mentioned in EO 49, I exercised my best judgment in issuing the Certificate of Provisional Exemption to PCV 10 in order to enable the Philippine government to purchase this vaccine, which is $1 per dose cheaper than PCV 13, but also of proven safety, quality and efficacy,” Ona said.

The PCV 10 purchase triggered controversy after Aquino ordered its investigation following reports that the DOH made the procurement contrary to the recommendation of the National Center for Pharmaceutical Access and Management (NCPAM) Formulary Executive Council (FEC) to procure the “more cost effective” PCV 13, which covers several pulmonary diseases.

When asked about his relationship with the acting health secretary, Ona said he thought it was “very ideal.’’

Ona said that even before his resignation became official, his personal stuff were removed from his office and sent to his house in Pasig City on orders of Garin.

“My personal things were brought to my house even before I officially announced my resignation and there’s only one person in DOH who could make such order,’’ Ona said.

He said that during his tenure, Garin served as the official liaison between the DOH and Malacañang because of her familiarity with the members of Congress.

Garin was the representative of the 1st District of Iloilo in the House of Representatives before she was appointed health undersecretary.