PCGG to have Imelda Marcos’ jewelry authenticated, reappraised in 2015

MANILA, Philippines—With Imelda Marcos’ jewelry, worth at most US$8.6 million, gathering dust at the Bangko Sentral ng Pilipinas (BSP) vault, the Presidential Commission on Good Government (PCGG) is looking to have them authenticated and appraised early 2015.

PCGG Chair Andres Bautista said that while the 1991 appraisal by Christie’s Auction House of the three sets of jewelry owned by former First Lady and now Leyte representative ranged from a low of US$6.4 million to a high of US$8.57, their value would likely turn out to be much higher now. 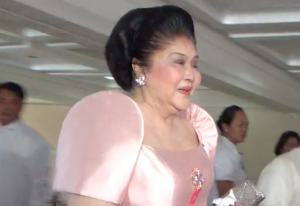 The appraisal values by Sotheby’s in 1986 was from a low of US$3.86 million to a high of US$5.3 million.  It was appraised in 2005 by the auction houses, which did not disclose the value in US dollars but had been touted by government officials to run up to billions of pesos.

“These (Marcos’ sequestered jewelry) should not be just sitting in a vault,” Bautista remarked, referring to the jewelry that have been stored in the vault for nearly three decades, adding that they should be put up for exhibit.

Bautista said that the PCGG has been looking to get Christie’s and Sotheby’s to authenticate and conduct an appraisal of the three sets of jewelry: The Malacañang, Hawaii, and the Roumeliotes collections.

The Malacañang collection worth at least US$100,000 is so called because they were left behind at the presidential palace when the Marcoses fled to Hawaii on Feb. 25, 1986.  The Hawaii collection is composed of jewelry seized by the US Customs from the Marcoses’ luggage when they arrived at the Honolulu International Airport.

On the other hand, the Roumeliotes collection is named after Greek national Demetrius Roumeliotes who was caught on March 9, 1986, by Customs men trying to smuggle out of the country some 60 pieces of Imelda Marcos’ expensive jewelry.

The Roumeliotes collection, composed of gem and diamond-studded tiaras as well as necklaces, earrings and bracelets, is the most valuable among the three sets of Marcos jewelry. It includes a US$1-million Bulgari bracelet with a 30.56-carat marquise diamond, an 18-karat gold woven belt with a diamond-studded buckle and other pieces by France’s Van Cleef and Arpels, Italian jeweller  Gianmaria Buccaletti, and nearly 70 rubies approximately 4 carats each.

The authentication by the international auction firms, Bautista explained, would prove that the jewelry stored at the BSP vault were genuine.

“This is to dispel suspicion that the jewelry have been replaced,” he pointed out, adding that the appraisal would update and obtain their true value.

Asked if an auction would soon follow the appraisal, Bautista said that the PCGG would not recommend any auction “at this time.”

The commission, he said, would only like to put Marcos’ bling on public display.

“We want them exhibited to inform the people with respect to their history and provenance,” the PCGG chair said, adding that they have not picked a proper venue for the exhibit.

“There is a dual purpose for that. Primarily it is to raise public awareness about the jewelry and where they came from. An exhibit of the Marcos jewelry could also hike up their value should they be auctioned,” he explained, pointing out that the jewelry were last displayed in September 2005.

In 2010, then outgoing President and now Pampanga Rep. Gloria Macapagal-Arroyo stopped the sale of the Marcos jewelry and left the decision on their disposition to her successor.  It was the fourth time that the plan to auction the jewelry was shelved.

President Benigno Aquino III, who was then set to take over the reins of government, had criticized Arroyo’s inaction on the matter during her nine-year term and had said that the disposition of the jewelry should be up to the next administration to decide.