How will Enrile, Estrada, Revilla spend first Christmas in jail? 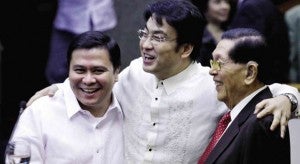 The lawmakers detained for plunder over the pork barrel scam may still be visited by loved ones, but only by immediate family relatives like spouses and children, the Philippine National Police (PNP) spokesperson Chief Supt. Wilben Mayor said in a radio report.

Mayor was quoted in a DZMM report as saying that the detained lawmakers are not prevented from throwing their own Christmas parties in jail. Revilla and Estrada are locked up at the PNP Custodial Center.

Enrile, who is in hospital detention, asked for the police’s permission for the showing of the film “Hari ng Tondo” on December 25 from 2 p.m. to 5 p.m. in his hospital detention room at the PNP General Hospital. The film’s director, Carlitos Siguion-Reyna, is Enrile’s nephew.

Mayor said the film’s writer and Siguion-Reyna’s wife Bibeth Orteza requested that the film be shown to be watched by Enrile’s family. Other patients may also be invited, the police official said.

The senators may still celebrate with their families for Christmas so long as they follow the visitation hour rule, which is from 1 p.m. to 5 p.m. on Christmas Eve and Christmas Day, Mayor added.

The three senators are facing plunder and graft charges for their alleged involvement in the purported diversion of their Priority Development Assistance Funds (PDAF) to ghost projects for kickbacks under the scheme of alleged mastermind Janet Lim-Napoles.

‘It will be a lonely Christmas,’ says Revilla