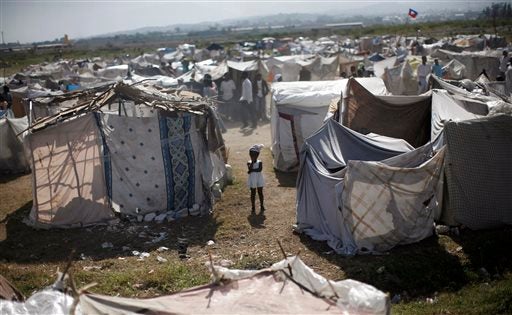 This Feb. 13, 2010, file photo shows a child standing among makeshift tents at a refugee camp for earthquake survivors in the Cite Soleil neighborhood of Port-au-Prince. A few hours before 19-year-old Britney Gengel was buried alive in the earthquake, she texted her parents her last dream: “I want to move here and start an orphanage.” Nearly five years later Gengel’s father is fulfilling the dream of his late daughter. AP

BOSTON— The parents of a young woman killed in the Haiti earthquake nearly five years ago have made good on her last wish.

Nineteen-year-old Britney Gengel (GEHN’-guhl) texted her parents just a few hours before she was buried alive in the quake. It said: “I want to move here and start an orphanage.”

So her parents started a nonprofit called Be Like Brit and opened an orphanage in a town in Haiti. It houses 33 boys and 33 girls — one of each for the number of days she lay in the ruins of her hotel after the quake hit Jan. 12, 2010.

It costs about $75,000 a month to run the orphanage. It’s paid for by donations and volunteer mission trips. There are 78 Haitians and two Americans on the orphanage staff.