Aquino agrees ‘in principle’ with Lacson on resignation as rehab czar 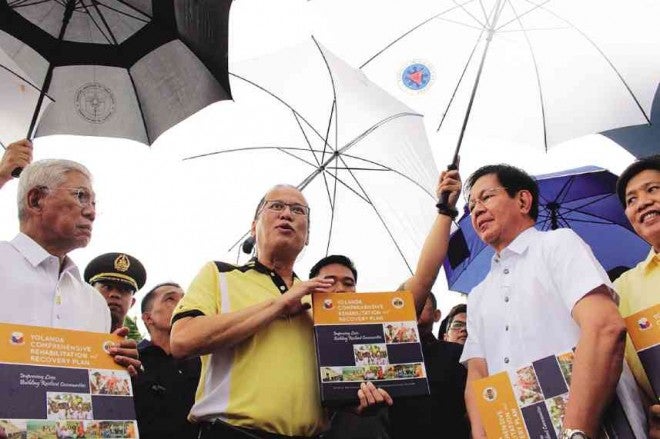 Presidential Assistant for Rehabilitation and Recovery Panfilo Lacson submits to President Aquino a copy of the master plan for the rehabilitation of areas hit by Super Typhoon “Yolanda,” one of the world’s strongest typhoons on record. Inquirer file photo by JOAN BONDOC

In a statement forwarded to the media by Communications Secretary Herminio Coloma, Lacson said the President respected his decision to step down from his post on February 10, 2015.

Lacson said he will step down because he thinks that his office has already fulfilled its job of implementing reconstruction efforts in areas hit by Yolanda.

He also said he wanted to turn over the duties of the Office of the Presidential Assistant for Rehabilitation and Recovery (OPARR), which he heads as a Cabinet-level post, to the National Disaster Risk Reduction and Management Council (NDRRMC).

“We agreed in principle to wind up my duties until February 10 when I shall have completed the transition to NDRRMC where the four phase cycle of addressing disasters rightfully belongs,” Lacson said.

He added that his resignation is timely because the law creating the NDRRMC will be subject to a mandatory review by Congress on or before May 27, 2015 as mandated by Republic Act 10121.

Lacson has also discussed with the President the transition to prepare the NDRRMC in handling the rehabilitation efforts in the aftermath of Yolanda.

Lacson said he has proposed elevating the position of the Office of Civil Defense Administrator and NDRRMC Executive Director and the National Economic Development Authority (NEDA) Director General as co-vice chairs to handle rehabilitation efforts “in a permanent capacity.”

“We had a good talk. I explained to the President the wisdom of strengthening NDRRMC especially in the area of rehabilitation and recovery, which, admittedly, is the biggest gap among the four thematic areas, namely, prevention and mitigation… preparedness, response and relief…,” he said.

Lacson also suggested the budget’s automatic release by the Department of Budget and Management to the NDRRMC, unlike the current practice of the NDRRMC first requesting funds from the DBM for two rounds of vetting before it is referred to the OPARR.

At least P80 billion is earmarked for the rehabilitation efforts in 2015.

Lacson said the President seemed to be paying attention to his suggestions.

“He was intently listening and taking notes,” he said.