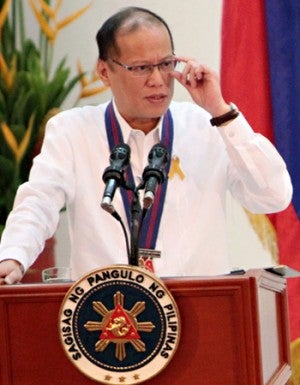 “This is a historic day. For the fifth time, we are on time in passing the budget for next year,” Aquino said in Filipino in a speech after the signing.

Aquino said pork barrel allocations are no longer part of the budget. “This budget is a true budget of the people.”

“We sped up the budget process, we lessened the need for Saro (special allotment release order) and signatures, the budget is good as released,” Aquino said.

Present at the signing were representatives from the business sector, donor community, civil society partners, heads and members of the Senate, House of Representatives and the Department of Budget and Management.

Other major allocations under the 2015 GAA include P53.9 billion for Basic Education Facilities, which covers the respective construction and repair of 31,728 classrooms and 9,500 classrooms, as well as the development of 13,586 water and sanitation facilities, and the procurement of 1.3 million seats, the DBM said in a statement.

Philhealth premium subsidies get P37.1 billion of the total budget to benefit 15.4 million poor and near-poor families, while P11 billion will be directed to socialized housing for in-need families, particularly those living in danger zones or high-risk areas, it added.

P89.1 billion will go towards boosting agricultural production projects under the Department of Agriculture and its attached agencies and various government-owned or -controlled corporations, the DBM said.

P14 billion has been devoted to the Calamity Fund—now known as the National Disaster Risk Reduction and Management Fund—while another P6.7 billion has been tagged as Quick Response Funds. Meanwhile, the Aquino administration’s “Build Back Better” program—designed to address the recovery requirements in the aftermath of Yolanda and other previous calamities—will get 21.7 billion for 2015.

The top 10 agencies with the biggest budget for 2015 are the following: