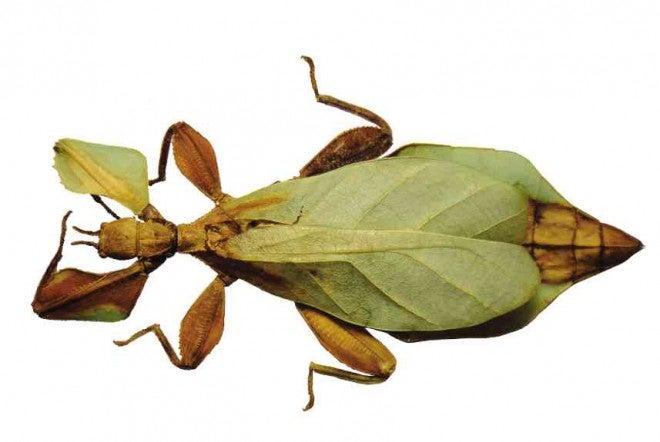 THIS newly discovered insect, the “walking leaf,” was named after Andres Bonifacio following its discovery in 2013, when the Philippines commemorated the hero’s 150th birth anniversary. PHOTO COURTESY OF THE UNIVERSITY OF THE PHILIPPINES LOS BAÑOS MUSEUM OF NATURAL HISTORY

SAN PEDRO CITY—Even with insects, looks can be deceiving.

Scientists from the University of the Philippines Los Baños’ Museum of Natural History (UPLB-MNH) have discovered a new insect species that looks like a dry leaf.

Lit and Eusebio published their findings in the German-based science journal Arthropoda Generalis on Dec. 19 to “formalize [the species’] description to science,” Lit said.

The 10-millimeter adult Phyllium bonifacioi, with an apple-green or cyan-green body, has “well-developed” wings that make it look like a leaf. It has segmented antennae, forelegs “about twice as long as the head,” midlegs and hind legs “slightly longer than the [forelegs],” the journal read.

“We were truly happy when we first saw it. It really looks like a leaf, especially the female one,” Lit said in a phone interview on Monday.

Phyllium bonifacioi is the latest addition to the Phyllium species, one of the four genera of the Phylliidae family. As of 2009, there are only nine species of Phyllium in the Philippines found in the dense forests of Mindoro, Palawan province and on Mt. Makiling in Laguna province.

The first leaf insect in the Philippines was recorded on Balabac Island in Palawan by Antonio Pigafetta, Ferdinand Magellan’s chronicler when Spanish troops arrived in 1521.

The new species was collected in 2011 during an expedition led by Dr. Rafe Brown of the University of Kansas and Dr. Arvin Diesmos of the National Museum of the Philippines at a forest in northern Luzon.

“We’d rather not disclose [the specific location] because of [potential] poachers,” Lit said.

Phyllium bonifacioi, which grows in three months “from egg to adult,” lays about

20 eggs, only half of which are hatched. This number, he said, is relatively few for an insect to produce.

Lit also feared that the new species could be listed as “vulnerable to extinction” due to its small number of distribution. He doubts if it could be eaten by humans since the female can emit foul odor once disturbed.

“With the discovery of [Phyllium bonifacioi], it shows that the Philippines is a region of megadiversity even among insects,” he said.