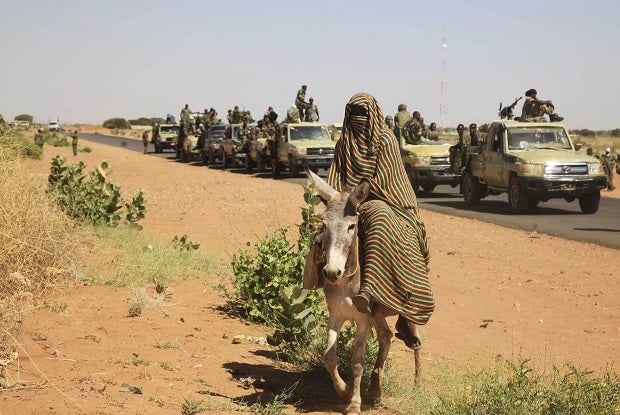 In this Thursday, Nov. 20, 2014 photo taken on a government organized media tour, a woman rides a donkey past a convoy of government troops in Tabit village in the North Darfur region of Sudan, where allegations surfaced of rape of women by government allied troops. AP

BEIJING—Chinese state media have reported that China will send 700 troops to South Sudan as part of the country’s first infantry battalion to participate in a United Nations peacekeeping mission.

The official Xinhua News Agency said 180 of the troops will fly to South Sudan next month followed by the rest of the battalion in March. The agency said the battalion will be equipped with drones, armored infantry carriers, anti-tank missiles, mortars and other weapons for self-defense purposes.

Xinhua said more than 2,000 Chinese peacekeepers are posted in conflict zones around the world.

South Sudan has been engulfed in civil war over the past year after its secession from Sudan in 2011.