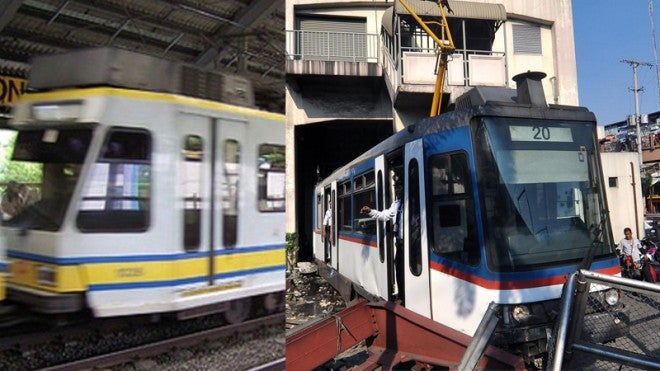 Commuters are railing against the upcoming fare increases of 50 to 87 percent on the Light Rail Transit (LRT) and the Metro Rail Transit (MRT) starting Jan. 4, pointing out that LRT-1 (left) and MRT-3 trains often break down. INQUIRER FILE PHOTOS

MANILA, Philippines–Commuters are railing against the upcoming fare increases of 50 to 87 percent on the Light Rail Transit (LRT) and the Metro Rail Transit (MRT) starting Jan. 4, pointing out that LRT-1 and MRT-3 trains often break down.

Marvie Villanueva, 28, a daily MRT-3 commuter from Makati to Ortigas, found the increase “too much,” given the bad shape of the trains.

In August, an MRT train went off track and slammed into the concrete barrier at the Taft Avenue Station in Pasay City, injuring some 40 passengers.

“Is the almost double rate a good increase? Can’t they increase the rate gradually? For me, the acceptable increase is from P15 to P18 or up to P22,” Villanueva said.

In a statement issued on Saturday, Transportation Secretary Joseph Abaya said the fare increases would result in marked improvements in the LRT and MRT services.

Malacañang asked for commuters’ understanding, saying it was “time to do what is right.”

Based on the fare matrices issued by the Department of Transportation and Communications (DOTC) and published in the Inquirer on Dec. 20, the rates for end-to-end trips for the three lines are the following:

— LRT-1: P29 for stored-value fare and P30 for single-journey fare from the current P20 (from Baclaran to Roosevelt and vice versa).

— LRT-2: P24 for stored value fare and P25 for single-journey fare from the current P15 (from Recto to Santolan and vice versa).

The DOTC approved the rates in 2011 after several hearings.

In a Facebook post, Train Riders Network (TREN) said the fare increases would prove disadvantageous to the public, especially to the poor.

The group said the fare increase would worsen the “already monstrously congested” traffic situation in the metropolis.

“Many would prefer to ride in jeepneys and buses, aggravating traffic. According to a Jica (Japan International Cooperation Agency) study, every day the Philippine economy loses at least P2.4 billion to traffic. Our economy stands to lose more if the citizens are disenfranchised from using the trains,” it said.

TREN said government management and not fare increase would guarantee that services at the country’s three train systems would improve.

“The fare increase isn’t the solution to make services better. The solution is that the government should be the one handling the train system and not the private sector,” the group said.

“The government should also purchase more efficient and safe trains and it should discontinue onerous MRT/LRT contracts that only compound the government’s debts to foreign banks and private firms.”

TREN said it was in talks with lawyers on the legal action that it may take after the DOTC “surprise announcement” of the fare increase over the weekend.

“The reason why fare hikes have been overwhelmingly opposed and always delayed is simple: They are unjustified,” said TREN spokesman James Relativo.

Villanueva said the fare increases “can be justified if [the authorities] make sure there will be more trains or the MRT will be well maintained.”

Communications Secretary Herminio Coloma Jr. reiterated the government’s position that “every Filipino,” even those outside Metro Manila and not using the train system, should not continue paying part of the fares with their taxes.

“It’s time to do what is right and that is to charge fares closer to those on air-conditioned buses (along Edsa),” he said over government radio.

Coloma asked for public “understanding and cooperation,” saying the existing subsidy could instead be used for “important social services that will benefit millions of Filipinos.”

In his State of the Nation

Address last year, President Aquino argued against the government subsidizing MRT and LRT fares. He pegged the amount of subsidy at P25 for every LRT trip and P45 for the MRT.

“In the end, each and every Filipino pays a share of the subsidy. Whether you live in Mindanao or Visayas, and not once have you ever stepped onto the LRT or MRT, you help to fund this,” he said.

The fare increases are aimed at reducing the P12 billion in annual subsidies by about P2 billion, according to the DOTC. It said the P2 billion was equivalent to 8,240 classrooms, or 11,440 hectares of irrigated farmlands.

Aquino said the decision not to increase fares in the past had been made by “leaders [who] did everything they could just to keep a firm hold on their power—at the expense of the suffering of present and future generations of Filipinos.”

“What’s worse: because past leaders gave away our commercial development rights, each peso that we can earn from the posters and billboards in the stations goes to private companies, instead of going to the government. What we could have used to subsidize the cost of maintenance and operations was given away,” he added.

A Bayan Muna lawmaker is asking his colleagues in the House of Representatives to take a few days off from Christmas break to conduct hearings on the LRT and MRT fare increases.

“We are calling on the House leadership to call a special session for this or for the transportation committee to hold hearings for House Resolution (HR) No. 111 even during the Christmas break because the fare increase will be implemented as early as the first Monday of January,” Rep. Neri Colmenares said in a statement.

HR 111 sought a probe of the then proposed fare increases for the LRT and the MRT.

“The argument that the subsidy allotted to the MRT/LRT should be lowered or given to other regions because they do not use it is wrong because such an argument can also be used against projects in other regions,” Colmeneras said.

He likened this argument to not constructing or rehabilitating a bridge in Eastern Visayas because the people of Mindanao would not be using it.

He said there was nothing wrong with subsidizing the transport needs of a predominantly poor population. “[W]hat is wrong is to create conflict and division among regions and provinces, and pit the projects and benefits of one region against the other.”–With a report from Gil C. Cabacungan