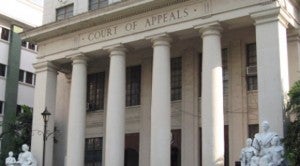 MANILA, Philippines – The Court of Appeals has dismissed with finality the writ of kalikasan case filed by residents of Obando, Bulacan protesting the establishment of a controversial “modern” sanitary landfill along the town’s coast.

In an 11-page resolution issued December 5, the appellate court’s Former 10th Division declared as legal and environmentally safe the modern landfill project of the EcoShield Development Corp., owned by businessmen Antonio Cabangon-Chua and his son Edgardo.

The issues that the petitioners—the Concerned Residents of Obando led by Obando resident Ma. Teresa Bondoc—raised in their motion for reconsideration “were already assessed, considered and adjudicated” and did not warrant the reversal of court’s ruling last August 29, the decision written by Justice Priscilla Baltazar-Padilla read.

The residents filed a writ of kalikasan case against the landfill before the Supreme Court, which did not issue the temporary environment protection order but instead referred the matter to the Court of Appeals for a hearing.

In its latest issuance, the appeals court said the petitioners failed to prove that the case involved an environmental damage of such magnitude as required by the Rules of Procedure for Environmental Cases (RPEC) that would merit a writ of kalikasan.

“The contending parties presented their respective expert testimonies. In the exercise of its discretion, coupled with the opportunity to evaluate the witnesses’ character and to observe their respective demeanor, this court opted to rely on the testimonies of the EcoShield’s expert witnesses who made a comprehensive study of the project and who actually went to the project site,” the court said.

“That these experts were under the employ of EcoShield does not necessarily warrant the presumption of bias on their parts as witnesses considering that their statements were duly supported by evidence,” the document reads,” it added.

The other division members, Justices Jose Reyes, Jr. and Agnes Reyes-Carpio, concurred in the ruling.

In its earlier decision, the court had said that the EcoShield project was much more environmentally safe than other dumpsites.

EcoShield requested the environment department’s Mines and Geosciences Bureau in October 2008 for the conduct of a geological study for the landfill in a 44-hectare reclaimed land acquired by the company in Barangay Salambao, Obando.

The Salambao barangay council in December 2010 and the Obando town council in January 2011 also granted project clearance to EcoShield allowing it to construct and operate the landfill. The project site was converted, with the approval of the provincial government, from agricultural to commercial/industrial classification in the following months.

However, residents, mostly fishermen and urban poor, opposed the landfill project and launched protest marches and signature drives against the project. They claimed the negotiations for the project were rushed and not transparent.

Environmentalists also aired concerns about the decimation of the mangrove forest along the barangay coast that contributed to the flooding in Obando while Roman Catholic faithful objected to what they regarded as the desecration of the site where the image of one of the town’s patrons, the Nuestra Señora de Salambao, was found in 1793.

The Court of Appeals upheld the reclassification as well as the ECC, saying EcoShield complied with the criteria for landfills set by Republic Act No. 9003 or the Ecological Solid Waste Management Act of 2000.

The court added that the landfill did not run counter to the continuing mandamus issued by the Supreme Court in “MMDA vs. Concerned Residents of Manila Bay,” adding that the case offered the establishment of a sanitary landfill as a solution to deter the continuous and persisting waste disposal problem of Metro Manila.

“It is time to give the project a chance to carry out its commitment to resurrect this waterway and provide solutions for proper garbage disposal,” the court had ruled.