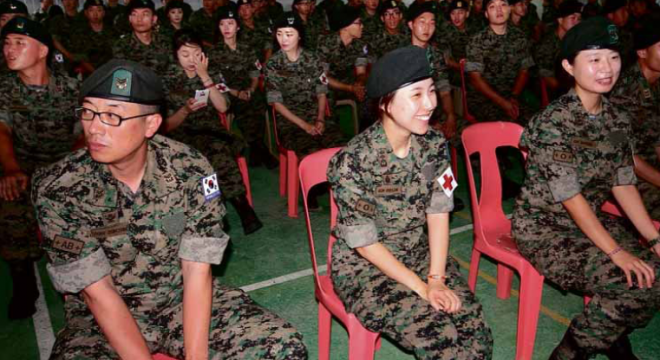 THE SUNSHINE TROOPS The 296-strong Korean Araw joint contingent who helped in the rehabilitation and reconstruction of “Yolanda”-ravaged communities in Leyte prepare to go back home after a year of deployment. DANNY PETILLA

PALO, Leyte—A few days before Christmas last year, Col. Lee Chulwon was preparing for the holidays with his family in his native Seoul.

But instead of spending the holidays with his family, Lee, on orders from his government, embarked on South Korea’s largest peacetime humanitarian mission ever: help its close ally the Philippines recover from the destruction brought by Supertyphoon “Yolanda” (international name: Haiyan).

Like the good soldier that he is, Lee bid his family goodbye, packed his bags and found himself surveying the near apocalyptic wasteland that was Tacloban City, this town and nearby Tanauan town where more than 7,000 perished during the storm.

As Filipinos faced their bleakest Christmas in years, 540 South Korean troops led by Lee who arrived in two six-month deployments prepared for South Korea’s biggest and longest international campaign that came in the wake of history’s strongest storm ever to hit land.

As the ravages of Yolanda started burning news wires and the Internet around the world, a curious thought crossed Lee’s mind.

“I had a feeling she (South Korean President Park Geun-hye) would send me,” Lee said through an interpreter.

Lee graduated from an officers’ course at the Joint Command and Staffs College in Camp Aguinaldo in 1998, which made him a natural choice for Park for the Philippine mission. 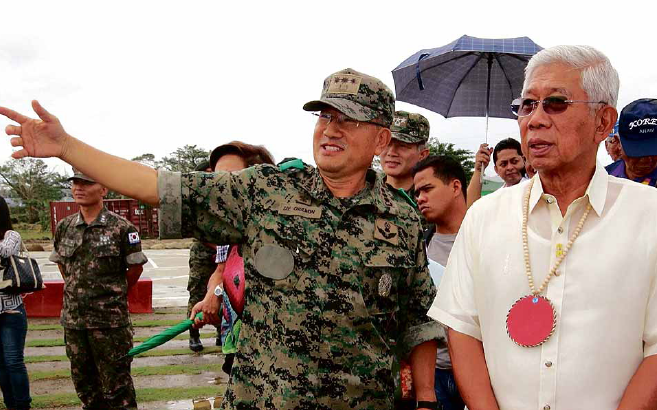 When Lee—a decorated 30-year veteran—landed in this town on Dec. 4 last year to do reconnaissance mapping, he could not believe his eyes.

A Presbyterian Christian, the 52-year-old Lee admitted he prayed for strength and divine guidance after seeing the overwhelming devastation.

“It was not very encouraging to be a Filipino in those days,” he said.

Acting on official request of assistance from the Philippine government, the South Korean joint military contingent known as Araw, a word coined by Lee himself, arrived in Cebu province on Dec. 28. The troops—and tons of heavy equipment aboard two of the Korean Navy’s landing ship tanks—were in Leyte province the next day.

While it was winter in their homeland, the Korean soldiers, mostly in their early 20s, were thrust into Leyte’s humid weather, but made their presence immediately felt by clearing tons of debris to make roads passable again, fumigating dirt-laden communities— and by burying the corpses of more than 1,400 people who died in the storm.

“I can’t say we did the dirty work. But that’s part of the territory,” Lee said.

From Jan. 3 until Nov. 27 this year, the Araw contingent rebuilt 67 buildings, including 37 schools and eight hospitals and four houses of Filipino war veterans who fought in the Korean War from 1950 to 1953.

“What a precious gift their presence here has become to us,” said Korean War veteran Domingo C. Teves Sr., 89. His damaged house in Tacloban City was rebuilt by the Araw forces.

“Where will we be without our Korean friends,” said Erwin Ocana, mayor of Tolosa town where the Koreans rebuilt eight schoolhouses and seven other government facilities.

But like babies demanding to suckle from the same milk bottle, the mayors at one time were clamoring for use of the South Koreans’ heavy equipment.

No stranger to the intractable terrain of local politics and turf wars, Lee met these kinks head on.

“We took the bull by the horns with honesty rather than with petty tricks,” Lee wrote in his book “Repaying Sacrifices of Blood with Sweat Drops.”

Published by Tacloban-based printer Tres Marias, the 309-page book is a personal account of Lee’s yearlong experience as head of Araw.

In his book, Lee expressed his frustrations at some of the organizational problems he ran into, like the habitual tardiness of local mayors that often derailed official events.

“I was sad to notice the lack of respect for the concept of time by some leading people of society,” Lee wrote.

Officials at the Korean public affairs office said it was a dig at Palo Mayor Remedios Loreto Petilla, matriarch of the powerful Petilla political dynasty in this province, who makes members of civil organizations, the military and the clergy wait for hours during various public functions.

“We are here investing heavily in your reconstruction, and your mayor (Petilla) forces us to wait for hours, that is not right,” a Korean officer close to Lee said.

In his book, Lee also disclosed how he sent home three young conscripts for getting drunk and ending up in the local massage parlor in Tacloban. The ironic twist is that the Koreans were led by a Filipino soldier.

“It pained me to have to cut short their duties, but I was left with no choice,” Lee wrote.

An ardent student of history, Lee is mystified by the Philippines’ falling behind its neighbors. An Asian economic powerhouse in the 1960s next only to Japan, the Philippines has lagged behind other economies in the region (39th in 2013 gross domestic product [GDP], at $272 billion) even with rising economic growth, while South Korea, economically backward in 1962, has vaulted to the top (14th in GDP in 2013 with $1.22 trillion).

Lee said he learned some of the reasons from his assignment here.

“I thought there was some small behavioral aspect that was blocking and obstructing the growth of the Philippines, which has great potential,” Lee said.

But nobody was talking about any negatives during the Araw mission completion ceremony at their camp in Candahug village here on Dec. 12.

“Let it be known that the Filipino people will forever be indebted to you,” said Armed Forces of the Philippines Chief of Staff Gen. Gregorio Pio Catapang Jr.

“Lives were relived and friendships forged by our soldiers of peace here,” said Korean Ambassador to the Philippines Hyuk Lee during the same ceremony where Korea—home to 54,000 Filipino migrant workers—pledged to assist the Philippines even after its troops’ departure.

During the ceremony, the Korean government turned over P200 million worth of excavators, forklifts, dump trucks, tractors, payloaders and backhoes—the same equipment that its troops used during the typhoon cleanup—to the AFP.

“Technically, only our bodies are departing,” Lee said with a laugh.

“Lee is a good friend, a sincere and passionate leader. I will miss him,” said Mayor Pelagio Tecson Jr., whose town, Tanauan, made Lee an adopted citizen.

But what inspired Lee during his work here was the smiles on children’s faces. Their smiles reminded him of his own children, whom he had not seen for almost a year.

Lee said his absence forced him to miss important events in his three children’s lives, like graduations and the debut of his oldest daughter, Si-ah, 25, a famous actress back in Seoul, as the love interest of South Korean superstar Rain in the TV series “You’re Too Adorable For Me” on Korean Broadcasting System on Dec. 13.

But there were Lee’s other loved ones as well—his wife, Sungsook Jung, 51, daughter Ju-ah, a 24-year-old Christian pastor, and his only son, Janggi, 20, with whom he would love to be reunited now that his deployment was over.

Like the rest of his 296 troops who would be leaving the Philippines on Sunday aboard two Korean Air planes bound for their homeland, Lee was eager to be with his family on Christmas Day.

“Christmas with my family? Now, that is a treat I’m looking forward to,” he said.