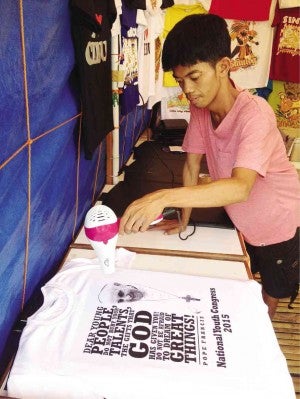 CEBU CITY—The strength of the city’s faith in the Catholic Church could be measured by how it anticipates the visit of Pope Francis, even if the city known for its devotion to the Church and its symbols is not on the Pope’s itinerary.

That Cebuanos had kept the faith in the midst of disappointment that the Pope would not even drop by is visible in one of the most commercial way that faith can be displayed—the sale of shirts bearing Francis’ image.

The absence of the city on the list of places that the Pope would visit on Jan. 15-19, 2015 did not stop enterprising individuals here from churning out T-shirts bearing the Pope’s likeness.

The shirts’ brisk sale is testament to how Cebuanos are keeping the faith alive and to Francis’ popularity.

Sale of the shirts is brisk in at least 20 booths lining the streets of the city.

“We didn’t consider making shirts as papal visit souvenir because they said the Pope is not coming here,” said Ritchie Patic, caretaker of booth No. 7.

“Despite that, a lot of our customers look for Pope Francis shirts,” he said.

The shirts, costing P160 to P220, are sold in booths set up by traveling merchants as part of the city’s grandest and biggest festival, the Sinulog Grand Parade on Jan. 18.

The Sinulog, celebrated every third Sunday of January in honor of the Sto. Niño, the Holy Child Jesus, kicks off on Jan. 9.

The booths traditionally sell shirts, key chains and hats to cater to the demand of tourists and returning Filipinos taking part in Sinulog. This year, however, among the prized items are shirts and other stuff that could serve as mementos of the papal visit.

The Pope’s visit has proven to be a boon to the entrepreneurs. “People prefer to wear these than those with Sinulog designs,” said Patic, pointing to a display of shirts bearing the Pope’s image.

Jonathan Culubio, shirt designer, said the huge demand for Pope Francis shirts prompted Patic to do a research on Francis’ quotes, letters and homilies to use these as part of the shirts’ designs.

When the first batch of Pope Francis shirts was displayed, customers immediately lined up to buy them.

Among the early customers is Rolando Patag, who was looking for a Christmas gift, but decided to buy a Pope Francis shirt for himself.

“I’ve been looking for a Pope Francis shirt but couldn’t find one, until I saw this booth,” Patag said. “I will wear this (shirt) in January. I want to see (the Pope) in person. But even if he doesn’t come to Cebu, I’d still thank him for visiting our country.”

Read Next
MMDA traffic constable dragged by SUV still in critical condition
EDITORS' PICK
Being a celebrity isn’t wholly an ‘advantage’ in the election, says Sotto
Acer starts the year off strong with the Aspire Vero National Geographic Edition
Octogenarian jailed for ‘stealing mangoes’ freed after people chip in for bail
Gov’t eyeing COVID-19 tests in pharmacies
Gear up and get ready to play with Yamaha Mio Gear
Over 3 Million worth of prizes to be won at Smart Padala’s SENDali Manalo Promo!
MOST READ
Imelda Marcos trends on Twitter after octogenarian jailed for allegedly stealing mangoes
Help pours in for octogenarian jailed for ‘stealing’ mangoes in Pangasinan
Natural immunity more potent than vaccines during US Delta wave—study
Bongbong Marcos-Sara Duterte tandem adds Zubiri, Gadon, Marcoleta to Senate slate
Don't miss out on the latest news and information.