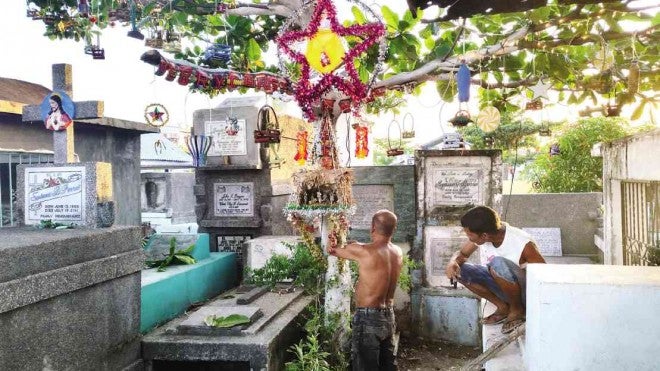 Despite the creepy, gray landscape of tombstones and graves, Christmas is very much alive at a public cemetery in Iloilo City.

“Many are curious and, at the same time, amused because this is the first time that there are Christmas trees and decorations inside the cemetery,” said Alex Fuertes, president of Tanza Cemetery Workers Association (TCWA).

“People are usually afraid of cemeteries but those who are buried here should be part of our Christmas celebration. We also want to share this season with the dead because working here has been our source of livelihood,” he told the Philippine Daily Inquirer.

Fuertes, 58, has been working as a tomb-maker in the cemetery since he was 17 years old. He was able to send his 10 children to school from his earnings.

At first, TCWA planned only a Christmas party, but a staff member of the city environment and natural resources office suggested holding the Christmas tree light and decoration contest instead to make their celebration livelier.

Fuertes said this was the first time that Christmas decorations adorned the place.

The decades-old cemetery spans an entire block from Tanza-Timawa to Delgado Street across the Iloilo City campus of the University of the Philippines Visayas. It primarily caters to indigents, but relatives of prominent Iloilo families and Japanese soldiers and officers who died during World War II are also buried there.

Family members of those buried have welcomed the holiday decorations.

“People who visit their loved ones here do not usually stay late at night because it was dark. But now, many stay and hang out even near midnight,” said Joel Fernandez. His grandparents, parents and uncles are buried in the cemetery.

For the Christmas contest, the cemetery workers divided themselves into six groups. Each group was assigned to decorate a tree.

They will share the electric cost of lighting up the trees from 6 p.m. until near midnight.

The contestants were given a leeway on their concept and design. They used recycled materials from the cemetery, including rattan and bamboo flower baskets and holders as well as plastic water bottles.

Some of the materials, like the bulbs, were borrowed from relatives and other villagers, Fuertes said, but others opted to buy the items even at a cost almost equivalent to the grand prize.

All six groups will receive prizes donated by relatives of the workers, barangay residents and some family members of those buried in the cemetery.

“It’s for fun rather than the prize,” Fuertes said.

The cemetery workers will hold a Mass on Dec. 26 along with bereaved families at the cemetery’s covered court. The next day, the winners will be announced and awarded during their Christmas party.

Fuertes said the party would be open to all villagers and guests—even for the cemetery dwellers.