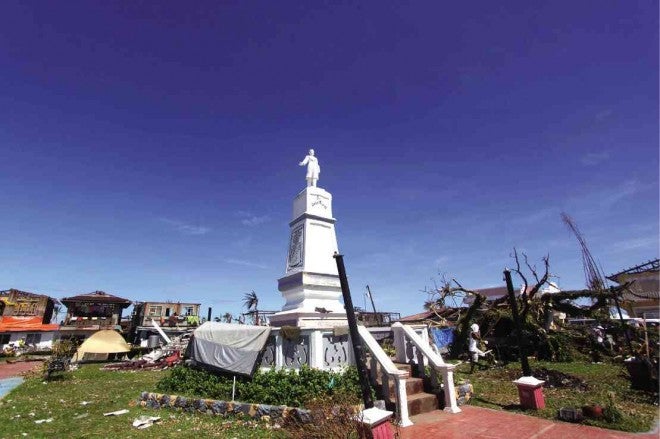 TYPHOON “PABLO” left communities around the town plaza of Cateel in Davao Oriental province in shambles but spared this monument of Jose Rizal in this photo taken shortly after Pablo struck in 2012. The storm destroyed more than 99 percent of infrastructure in the town. INQUIRER MINDANAO

DAVAO CITY, Philippines—President Benigno Aquino III may have unwittingly endorsed the hottest product of Davao Oriental—chili sauce—as enterprises and farmers in the province are now trying to cash in on the product’s newfound fame.

Mr. Aquino, during a town hall meeting in February with at least 1,000 residents of Cateel, a town in Davao Oriental hardest hit by Typhoon “Pablo” in 2012, encouraged farmers to plant chili, dry these and turn them into what the President said is “Hot Pablo,” or chili sauce.

It was a pun on the chili’s famed tongue-burning spiciness and Pablo’s ferocity, but the President’s remark left a lasting impression, repeated by producers who decided that “Hot Pablo” would be an excellent brand name.

The President’s unintended endorsement, however, is not enough to send the products flying off the shelf as the province’s chili sauce is not even on one because of a technicality—lack of approval by the Food and Drug Administration (FDA).

Jose Calub, officer-in-charge of the Department of Trade and Industry (DTI) in Davao Oriental, said the province’s chili sauce is too hot that it generated more than P6 million in sales in trade fairs and souvenir shops.

At least 362 farmers in the province were lured by the prospects of chili that they turned to planting it, especially the labuyo variety.

Chili could yield an income of P187,000 per hectare. Chili farms are found mostly in the towns of Cateel, Baganga and Boston, which were all hit by Pablo.

Some of the interested buyers are from Singapore and Indonesia.

But the province’s chili industry can’t take off commercially because of lack of permits from the FDA.

“Some of the requirements to get an FDA certification are stringent, like the construction of facilities,” said Calub.

“This is the current problem faced by the producers before they can enter the international market,” he said.

He said for a capitalization of P50,000 to produce chili, farmers need to spend at least P500,000 to build a facility to meet the FDA requirement.

“The FDA requirement is quite heavy for the producers, who are just recovering from the impact of Pablo,” he said.

The DTI said if the FDA requirement could be met, the exportation of “Hot Pablo” would boost the province’s economy.

“The processing of FDA certification is ongoing,” Calub said.

He said the DTI and local government units in the province are helping producers meet the FDA requirements.

“Hopefully they can get the certification within this year,” Calub said. He said two of at least seven producers are capable of complying with the requirements.

Chili offered hope to Pablo survivors after farmers saw that chili plants remained standing and continued to bear fruit even as Pablo laid to waste hundreds of hectares of farms in the province.

The planting of chili is now a craze in the province, spreading to at least 50 hectares of farms in the three towns.

Chili is sold to processors that turn these into powder, paste and flakes.

Calub said demand for chili is rising and the provincial government could ride on it by expanding the farming area devoted to chili to at least 400 hectares. Judy Quiros, Inquirer Mindanao