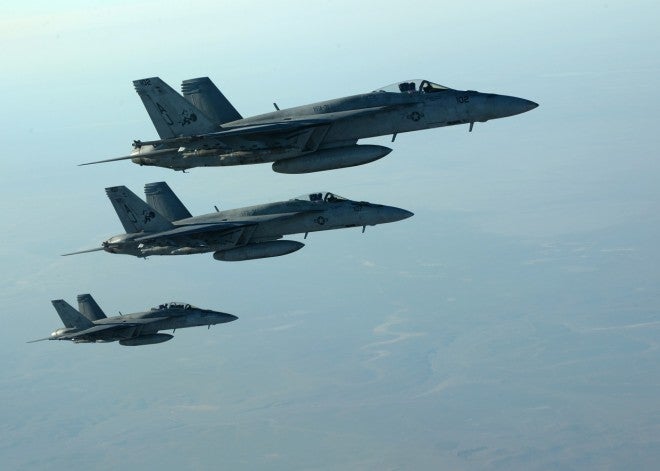 In this Tuesday, Sept. 23, 2014 photo released by the U.S. Air Force, a formation of U.S. Navy F-18E Super Hornets leaves after receiving fuel from a KC-135 Stratotanker over northern Iraq, as part of U.S. led coalition airstrikes on the Islamic State group and other targets in Syria. AP

WASHINGTON, United States – US and allied warplanes have carried out 61 air strikes against Islamic State jihadists in Iraq since Monday, including dozens in support of Kurdish forces, the military said Wednesday.

The air assault represented a spike in the pace of US-led strikes compared to recent days.

The US military did not specify where the 45 strikes took place, but the announcement came as Kurdish forces launched a major offensive around the Sinjar area near the Syrian border.

The Kurdish operation is being staged from two locations: Rabia on the border with Syria and at Zumar along the Mosul dam, senior officers in the peshmerga said.

The peshmerga chief of staff, Massud Barzani, who is president of Iraq’s autonomous Kurdish region, said the aim was to recapture the entire Sinjar area.

The US military said the air raids in support of the Kurds involved 15 coalition aircraft and the targets hit included “bulldozers, vehicles, checkpoints, enemy fighting positions, enemy fighters, and equipment.”

In addition, US-led aircraft carried out 16 other strikes in Iraq, bombing IS militants near Mosul, Arbil, Tal-Afar, Heet and Ramadi.

In Syria, the coalition conducted six strikes, including five raids around Kobane near the Turkish border, it said.

US drops arms, ammunition to Kurds battling IS in Kobane