Scientists: Alcatraz escapees could have survived 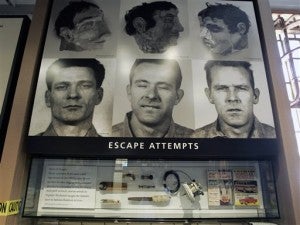 An exhibit about a 1962 prison escape made famous in the movie, “Escape from Alcatraz,” is displayed in the museum store on Alcatraz Island in San Francisco. Scientists say the three prisoners who escaped from Alcatraz in one of the most famous and elaborate prison breaks in U.S. history could have survived and made it to land. Using software to study currents the night of the 1962 escape, three Dutch scientists concluded the three men could have made it to land north of the Golden Gate Bridge if they left between 11:30 p.m. and midnight. Prison officials and federal agents insisted at the time that the inmates perished, but their bodies were never found.(AP Photo/Eric Risberg, File)

SAN FRANCISCO — The three prisoners who escaped from Alcatraz in one of the most famous and elaborate prison breaks in U.S. history could have survived and made it to land, scientists concluded in a recent study.

The three Dutch scientists, using the latest hydraulic software and information about tides on the night of the 1962 escape, said the three men could have made it to land north of the Golden Gate Bridge if they left between 11:00 p.m. and midnight. If they left before 11 p.m., the strong currents of San Francisco Bay would have carried them to the Pacific Ocean and death, the scientists said.

Prison officials and federal agents insisted at the time of the escape that the inmates — brothers John and Clarence Anglin and Frank Morris — perished, but their bodies were never found, continuing speculation that they survived.

“Of course, this doesn’t prove that” they survived, one of the scientists, Rolf Hut, a researcher at Delft University of Technology in The Netherlands, said in a news release about the study. “But the latest and best hydraulic modelling information indicates that it was certainly possible.”

The scientists presented their findings Tuesday at the American Geophysical Union conference in San Francisco.

The three prisoners were serving sentences for bank robbery when they pulled off the escape with stolen spoons, dummy heads and a raincoat raft. Their exploits were turned into the 1979 movie, “Escape from Alcatraz,” starring Clint Eastwood as Morris.

U.S. Marshal Michael Dyke, who inherited the unsolved case in 2003, told The Associated Press two years ago he didn’t know whether any of the trio was still alive. But he had seen enough evidence to make him wonder.

That evidence included credible reports that the Anglins’ mother, for several years, received flowers delivered without a card and that the brothers attended her 1973 funeral disguised in women’s clothes despite a heavy FBI presence.

For their study, the Dutch scientists simulated scores of boat launches from different points on Alcatraz Island every 30 minutes between 10 p.m. and 4 a.m. on the night of the escape. They also factored in the possibility that the inmates paddled.

The model that concluded they could have reached land north of the Golden Gate Bridge also found that any debris they released in the water would have floated toward another island in the bay.

The researchers said they did not set out to study the Alcatraz escape. The project was initially intended to analyze flood risk to large industrial facilities on the bay.