Mar Roxas assured: It’s all right to be rich 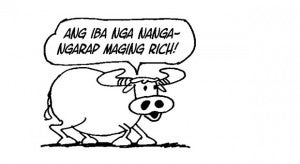 MANILA, Philippines–Stop trying to look poor; there’s nothing wrong with being born rich.

This was the advice given to Interior Secretary Mar Roxas by House Majority Floor Leader Neptali Gonzales II when he was asked on Tuesday about the declining popularity of the Liberal Party’s presumptive standard-bearer.

Roxas slid to sixth place in the latest Pulse Asia survey on presidential preference, receiving a hypothetical vote from only 6 percent of the respondents, a sharp decline from his 13-percent rating in the previous quarter.

“What people have been saying about him is (that) he’s trying hard to look masa (poor),” Gonzales said of Roxas, the son of the late opposition Sen. Gerry Roxas, a grandson of former President Manuel Roxas and a scion of the old rich Araneta clan.

“(I)t’s not wrong to be born rich,” Gonzales told a press forum. “What (Roxas) needs to do is to show people that despite the fact that he’s rich, he will go out of his way to reach the poor.”

The House majority leader cited instances when Roxas was criticized for trying to appeal to the poor, such as when he directed traffic at a busy intersection or when he was photographed riding a motorcycle in a disaster-hit area. His senatorial campaign in 2004 also billed him as “Mr. Palengke.”

“The problem with Mar… is everything he does, people read meaning into it,” Gonzales said.

In contrast, added the chair of the Liberal Party’s parliamentary caucus, Sen. Grace Poe surged past Roxas in popularity because the public looked at her in a more positive light.

“Politics is perception, whether you like it or not,” Gonzales said. “Because of available media, public opinion can always change overnight.”

Binay was a classic example, according to the House majority leader.

“In January of 2010, (his rating was only) 5 percent against Mar Roxas [who was leading the surveys]. But (Binay) won because his message that he’ll do to the Philippines what he did in Makati resonated. People believed that,” Gonzales said.

Which was why, he added, candidates should not sleep.

“While surveys (are) not the be-all or end-all of a candidate, (they’re) a good indication of where (the candidates) stand. What I’m saying is, do not think that whoever is at the bottom has no right to run anymore. (Things) change depending on how you deliver your message,” he said.

So what could Roxas do to become more popular, Gonzales was asked.

What’s wrong with Roxas? He tries too hard to impress the ‘masa’—Gonzales