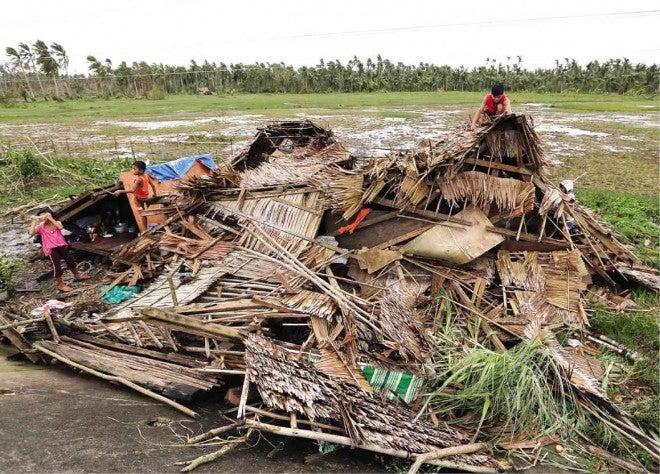 Among the groups is Zuidoost Azië (ZOA), Dutch term for Southeast Asia, which is building 1,200 new hurricane-proof shelters in the severely hit Eastern Samar towns of San Julian, Dolores, Taft and Sulat.

The Apeldoorn, Netherlands-based ZOA, which opened its country office in Borongan City after Yolanda devastated central Philippines in November 2013, built the first batch of 1,200 houses for the typhoon survivors in four towns in the southern part of the province—Hernani, Balangkayan, Quinapondan and Giporlos.

“None of the existing houses [built after Yolanda] was damaged [by Ruby], a proof that they could withstand strong winds,”said ZOA country manager Eda Cabaluna-Michaud in a phone interview on Sunday.

ZOA is putting up 1,200 new houses according to the “build back better” principle, similar to the first 1,200 units built last year.

The housing unit uses concrete footing and posts and marine plywood for the walls. The walls are reinforced by using diagonal beams and installing hurricane straps or clips instead of ordinary nails. Each house, with a floor area of 15 to 22 square meters, costs P48,000, Michaud said.

The government recently came under fire after several bunkhouses built for Yolanda survivors in Tacloban City, Leyte province, failed to withstand Ruby. The Department of Public Works and Highways, which constructed the bunkhouses, later said these were intended only as temporary shelters.

Most of the nongovernment organizations (NGOs) were on the last phase of their rehabilitation program for the Visayas but had to extend their stay due to Ruby, Michaud said.

Another Dutch NGO, Terre des Hommes, is also building 127 “movable” shelters, each worth P32,000, for Ruby survivors in San Julian.

“A problem we are faced though is that the target beneficiaries live in coastal and river areas. If the government could find them a relocation site, they can move together with the houses,” said Terre des Hommes project manager Donabelle Abalo.

Most of the houses damaged by Ruby were made of light materials in the coastal villages.

Eastern Samar disaster risk reduction and management council head Levy Nicart on Sunday said 22,160 houses were destroyed while 49,972 were damaged by Ruby. Nine people were killed at the height of the typhoon, which hit the province on Dec. 6.

Nicart said the provincial government had only P12 million in calamity fund, which is spent for relief packs and tarpaulins as part of the shelter kits.

The province is still without electricity but Eastern Samar Electric Cooperative has promised to restore power supply by Dec. 23, Nicart said.

“The government has not issued any call for international aid but since they (humanitarian groups) are already here anyway, it’s good they are helping us out,” he said.