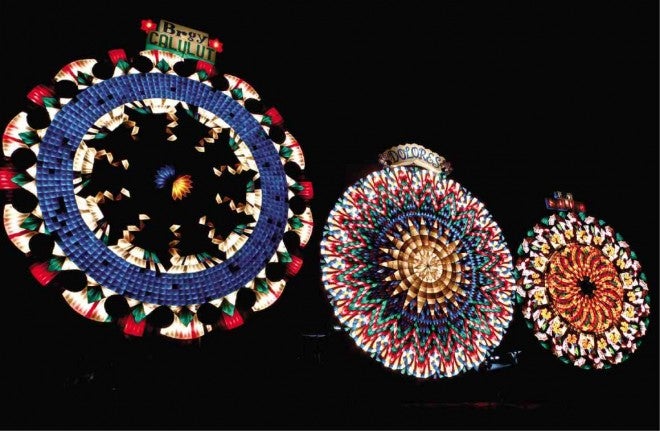 LANTERNS made by craftsmen from the City of San Fernando in Pampanga province compete and entertain the crowd at the recent 2014 Giant Lantern Festival. E.I. REYMOND T. OREJAS/INQUIRER CENTRAL LUZON

CITY OF SAN FERNANDO— This capital of Pampanga province pressed on with the 106th edition of its Ligligan Parul (Giant Lantern Festival), where the city’s craftsmen showed off nine two-story-high lanterns that represented the Star of Bethlehem.

Eleven judges, who included diplomats and artists, chose the lantern of Barangay Dolores to be the best lantern in the festival’s staging this year.

Designed by tricycle driver Teddy Aguilar and using rotors made by Darwin Dayrit, the Dolores lantern featured an image of the belen (Nativity scene), which sparkled with 20 patterns of lights.

The crowd cheered the rotor operators who made the lights dance with the music. Rotors are aluminum sheets rolled into barrels. Operators are able to move this contraption through a car wheel fitted to the rotor.

The crowd watched the operators, whose moves were caught on camera from behind the scenes and beamed live to the audience on large screens.

This was 43-year-old Aguilar’s first time to design a giant lantern. For more than 20 years, he was a handyman in many similar projects.

The village received the revolving trophy and bagged the top cash prize of P150,000. Aguilar and his team will get a share of P30,000 from the prize while the village will keep the rest of the amount to pay some of the cost of building the lantern, which runs to as much as P600,000.

The lantern of the defending champion, Barangay Telabastagan, designed by Arnel Flores, placed third while the entry of Barangay Calulut, designed by Eric Quiwa, was second. These villages got P75,000 and P100,000, respectively.

Special citations were given to the late musical composer Benito Escasa, who composed the festival’s official song, and to Ernesto Quiwa, who, with

50 years of experience of making lanterns, has been regarded as a local living treasure.

“This is so good, fantastic … There are so many dancing lights,” said Jonny Fukuhara, 29, a visitor from Tokyo.

“I have not seen big lanterns like these,” said British tourist Susan Western.

Marion Jaime came all the way from Iligan City in Mindanao to watch the festival while Jan Chong drove from Caloocan City in Metro Manila to catch the event. “The designs are unique and the event is very organized,” Chong said.

Read Next
Small steps for organic farming in Pangasinan
EDITORS' PICK
Do all the things you do, faster
Motorcycles, smartphones, and cash prizes up for grabs in TNT’s ‘Tuloy Ang Saya’ Raffle in Mindanao
House energy committee chair Arroyo bats for cheap electricity
NCR at increased COVID risk again
New PS-DBM director says DepEd laptop MOA ‘not legal’
House okays budget; ways to go in Senate
MOST READ
Robredo’s tarpaulin portrait at Palace just a ‘placeholder’
Shopee PH gets flak for getting Toni Gonzaga
Robredo supporter tackles elephant in room: No massive fraud in 2022 polls, surveys were just right
DepEd: We are in a crisis situation in education sector
Don't miss out on the latest news and information.