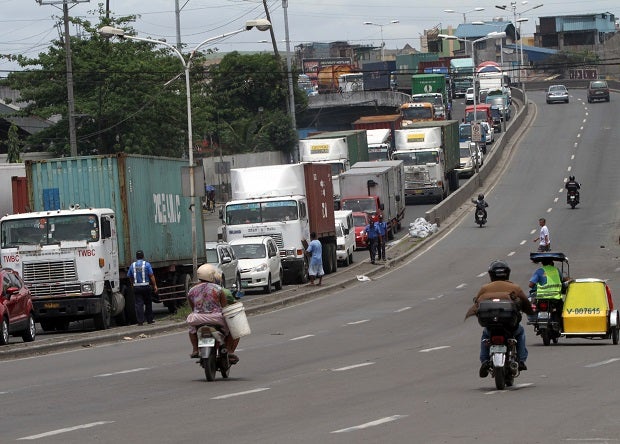 First the good news. Cargo trucks will soon be making a comeback on Roxas Boulevard after Cabinet Secretary Jose Rene Almendras and trucking groups asked for some consideration to speed up the delivery of goods before Christmas.

The bad news, however, is that truckers will be allowed to use the express lane on the busy thoroughfare for just five days and only during a five-hour window period which starts at midnight.

Tolentino made the announcement during the agency’s Sunday radio program, saying that the arrangement would take effect “from Dec. 17 to 22 only, from midnight to 5 a.m.”

Adding that he would issue a circular on the matter Monday, he expressed hope that the move would help ease congestion at the Port of Manila.

At the same time, Tolentino advised truckers to start making their deliveries as early as 11:30 p.m. on Dec. 19 when traffic is expected to be very heavy, it being the last Friday before Christmas.

Two weeks ago, the Metro Manila Council’s special traffic committee released a resolution banning cargo trucks and other heavy vehicles with a gross weight of 4,500 kilograms from Roxas Boulevard for six months starting on Dec. 3. The prohibition, Tolentino explained, was in preparation for the various activities scheduled next year, including the papal visit and the Feast of the Black Nazarene.

Those who ply these routes would be exempted from the current truck ban which is enforced from 6 a.m. to 10 a.m. and between 5 p.m. and 10 p.m. every day, except on Sundays and holidays, he added.

Trucking groups, however, protested, saying the ban would lengthen their travel time, resulting in bigger fuel expenses. The Confederation of Truckers Association of the Philippines earlier said that the utilization of old routes would mean an additional three hours of travel time as well as it would delay government efforts to decongest Manila ports.

The Alliance of Concerned Truck Owners and Organizations, on the other hand, said that barring them from using Roxas Boulevard would cause a “spillover” of cargo trucks to C-5 Road or the South Luzon Expressway.

In June this year, the MMDA designated 24/7 truck lanes in Manila, including the one on Roxas Boulevard, “due to the exigent necessity to decongest the ports.”

MMDA Traffic Engineering Office head Noemie Recio said that allowing truck back on Roxas Boulevard, although for just five days, would be a big help to the trucking industry.