Russia threatens response if US sets new sanctions over Ukraine 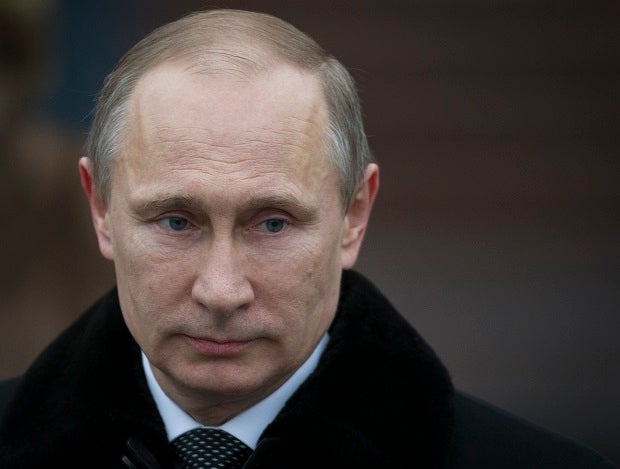 In this Feb. 23, 2014, file photo Russian President Vladimir Putin walks as he attends a wreath-laying ceremony at the Tomb of the Unknown Soldier in Moscow. Russia has threatened to respond if the US imposes new sanctions on Moscow over Ukraine. AP

MOSCOW, Russia – Russia responded angrily on Saturday to news that US senators had passed a bill calling for fresh sanctions against Moscow and the supply of lethal military aid to Ukraine.

“Undoubtedly, we will not be able to leave this without a response,” deputy foreign minister Sergei Ryabkov told Interfax news agency ahead of a meeting between the Russian and US foreign ministers.

The Senate bill — dubbed the Ukraine Freedom Support Act — must still be approved by the White House, which has so far been reluctant to provide direct military assistance to Ukraine for fear of being drawn into a proxy war with Russia.

Ryabkov blamed “anti-Russian moods” in the United States for the bill passed on Friday, which calls for additional sanctions against Russia and the delivery of up to $350 million (280 million euros’) worth of US military hardware to Ukraine.

The eight-month conflict between government forces and pro-Russian separatists has left at least 4,634 dead and 10,243 wounded, while displacing more than 1.1 million people, according to new figures released by the United Nations.

It also threatens fresh sanctions against Russia, whose economy is crumbling under previous rounds of Western sanctions and a collapse in oil prices.

Kiev lawmakers have hailed the bill as a “historic decision”. They have long been pressing the West to provide military support to their beleaguered army, but have so far received only non-lethal equipment.

The controversy is likely to come up Sunday when US Secretary of State John Kerry meets Russian Foreign Minister Sergei Lavrov in Rome. However, Ryabkov said that “the main focus at their 17th meeting this year would be on the Middle East.”

A State Department official confirmed to AFP that the meeting would be Sunday after Washington had initially said it was set for Monday.

A tentative ceasefire has been in place along the frontline in eastern Ukraine since Tuesday, and fighting has been greatly reduced despite occasional breaches.

The Ukrainian army on Saturday reported 11 attacks on its positions in the past 24 hours but no one was killed or wounded.

It also said a drone was spotted over Mariupol, the last major town in the southeast under its control.

Ukraine has been worried for months that the Russia-backed separatists will launch an offensive on Mariupol in a bid to build a corridor between the Russian border and the Crimean peninsula, a Ukrainian region which was annexed by Moscow in March.

Around the airport in Donetsk — site of some of the fiercest fighting in recent months — “the night was rough”, Maxim, a volunteer soldier with the right-wing Pravy Sektor group, told AFP.

“Snipers fired on us and explosions were coming from the airport. But everything is calm this morning,” he said.

Ukraine announced Friday it would bolster its army next year by conscripting another 40,000 soldiers, training 10,500 new professionals and doubling its military budget.

Meanwhile in Kiev, efforts by the artistic community to rise above the international conflict fell flat when the ballet school rejected charity money raised by Moscow’s Bolshoi Theatre, it emerged Saturday.

Prima ballerina Svetlana Zakharova organized a special gala at the Bolshoi last week to raise money for her old school in Kiev, but the cash was turned down when the Kiev State Ballet School learned that she had supported Russia’s annexation of Crimea.

“The Ukrainian artists who participated in the concert appear to not be aware that the Russian dancer S. Zakharova signed a letter supporting the politics of (Russian President) Vladimir Putin in Crimea,” wrote the school’s director Ivan Doroshenko in a letter published on the culture ministry’s website.

“Otherwise, they would never have agreed to take part in this provocative farce.”

The Crimean peninsula was annexed by Russia in March after a referendum that was heavily criticized by Ukraine and the West.