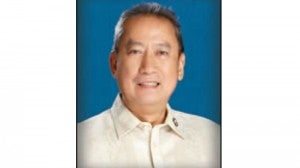 LAGUINDINGAN, Misamis Oriental—Iligan City Rep. Vicente “Varf” Belmonte survived an ambush by armed men as he was leaving the airport here on Thursday afternoon, saying it could be politically motivated.

“Gubot ang Iligan (Iligan is chaotic),” Belmonte told a local radio station in a phone interview from an undisclosed hospital, where he was brought for treatment of a splinter wound reportedly in the thigh.

Three persons in Belmonte’s two-car convoy were killed when the attackers in a yellow van blocked the road at 1:45 p.m. and started shooting. They were identified as PO3 Marcus Agtina Andres, a police escort; Ian Dumaguing, 29, a driver; and Eustique Silanan, 40, a close aide.

The lawmaker, who is on his third and legally mandated final term, is a relative of one of the nation’s most powerful politicians, Speaker Feliciano Belmonte Jr. He belongs to the ruling Liberal Party.

“Yes, I talked with him over the phone. [He’s] wounded but [it’s] not life threatening. He thinks it’s politically motivated. He’s my distant cousin,” the House leader said in a text message.

During the radio interview, Belmonte, 60, said he could not think of any other reason for the attempt on his life. “It is political.” he said, adding that he had recently received threats to his life.

“I have received many threats,” he told ANC. “We just don’t know who really is the mastermind.”

The lawmaker, who had served as councilor of Iligan from 2004 to 2007, has been at odds with several politicians in Iligan and Lanao del Norte, the Inquirer has learned.

Belmonte, who was riding in a BT-50 Mazda pickup truck, was turning toward Iligan from the Laguindingan Airport Road when the van blocked its path, police said. He had just arrived here from Manila.

Several armed men alighted from the van and fired at the convoy, police said. The vehicle was later found abandoned in Barangay Liberty here.

Witnesses, however, told police that another group of gunmen was positioned on one side of the highway.

Maj. Christian Uy, spokesman of the military’s 4th Infantry Division based in Cagayan de Oro, said two of Belmonte’s companions were killed instantly while another died at Alubijid District Hospital in the adjacent town of Alubijid.

“His police escorts were able to fire back. We have sketchy reports that [some of the suspects] sustained injuries,” Samar Rep. Mel Senen Sarmiento said in a phone interview in Quezon City.

Dozens of empty shells fired from Armalite rifles and .45-cal. pistols were recovered from the crime scene, said Senior Supt. Felipe Abigan, an official of the Philippine National Police in Northern Mindanao.

Cagayan de Oro Rep. Rufus Rodriguez said Belmonte was wounded in the thigh but is out of danger.

Senior Supt. Leonilo Cabug, Misamis Oriental police director, said Belmonte had been escorted to Iligan later in the day by an armored personnel carrier and soldiers from the Army’s 4th Mechanized Battalion.

Cabug said the attackers were fleeing on foot after setting their vehicle afire. “The police and the Army are hot on their trail,” he said.

Villagers told police that they saw at least three men, including one in a military uniform, with rifles leaving the ambush scene in another vehicle.

“We demand that justice be served against those responsible for this most heinous act, and we call on the full force of the law to act swiftly and deliberately,” Nograles said.

Treñas said he found it hard to understand how anybody could think of hurting Belmonte.

“Fortunately, the hand of God protected our dear friend and saved him from this assassination attempt. Now it’s the PNP’s turn to run after the culprits and bring the culprits to justice,” he said.–With reports from Karlos Manlupig, Inquirer Mindanao; DJ Yap in Manila; and AFP