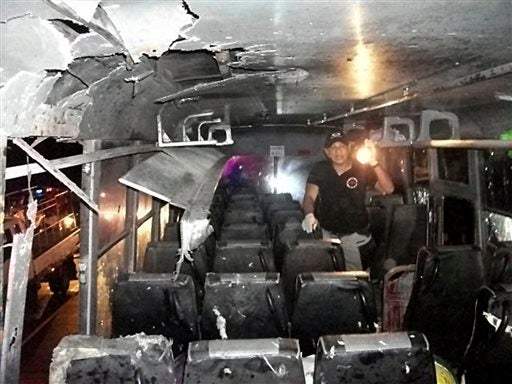 MANILA, Philippines–Malacañang on Wednesday condemned the bombing of a passenger bus in Bukidnon, which left at least 11 people dead, and said authorities were bent on finding out who was responsible for the incident.

“Certainly we condemn the violent act that resulted in the loss of lives of nine people—my latest information was nine—and more than 15 injured,” deputy presidential spokesperson Abigail Valte said in a press briefing.

The Philippine Daily Inquirer reported that at least 11 people died and 21 others were injured when a bomb exploded inside a Rural Transit bus in Maramag, Bukidnon, as it made its way to Cagayan de Oro City.

Valte said Malacañang received the information on Tuesday night, hours after the incident.

“First and foremost, we do extend our sympathies to the families of the nine as well as the injured, and we will be assisting in any way that we can for what has happened to them,” Valte said. “But, certainly, we are set on finding who is responsible.”

As of posting time, no group has claimed responsibility for the bombing.

“The full investigation is already underway,” Valte said, explaining that she will not be able to discuss the details of the investigation and the leads being pursued by government forces.

Read Next
Activists: Aquino failed in human rights landscape
EDITORS' PICK
Metro Manila to remain under COVID Alert Level 2 until December 15
Legarda: Ending Violence Against Women, a cause for all
A delightful blessing!
Duterte open to making jabs mandatory; Cabinet mulls ‘pressuring’ the unvaccinated
IATF tightens border control, suspends entry of fully vaxxed nationals from ‘green’ countries
Villar Group gears up for AllValue Shopping Party on Dec. 3; around P 1-million promos and discounts up for grabs
MOST READ
Quiboloy warns of ‘much worse than Omicron virus’ if his ‘persecution’ is not stopped
Bongbong Marcos’ conviction in tax case not a crime involving moral turpitude — lawyer
Marcoleta defends pol ads on ABS-CBN
IATF tightens border control, suspends entry of fully vaxxed travelers from ‘green’ countries
Don't miss out on the latest news and information.