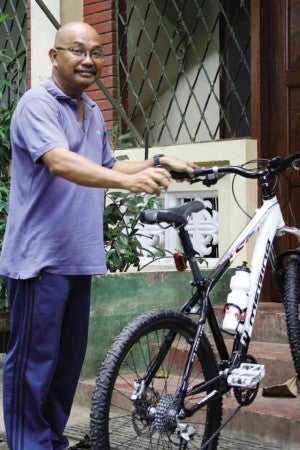 REDEMPTORIST priest Amado Picardal prepares to embark on another biking mission, one that will take him at least 1,800 kilometers from Metro Manila to Iligan City, to draw attention to climate change and its disastrous effects on the country.
DENNIS JAY SANTOS/INQUIRER MINDANAO

DAVAO CITY, Philippines—A Redemptorist priest who preached for peace in a nationwide journey on a bicycle in 2008 is embarking on a similar feat starting today (Wednesday), this time to raise awareness about climate change on behalf of calamity victims.

“I am doing this in memory of the victims of [Tropical Storm] ‘Sendong’ (international name: Washi in 2011), [Typhoon] ‘Pablo’ (Bopha in 2012), [Supertyphoon] ‘Yolanda’ (Haiyan in 2013), and [Typhoon] ‘Ruby’ (Hagupit this year),” said Fr. Amado Picardal, who is known for mounting advocacy runs and cycling.

“I also wish to draw attention to climate change, which has made supertyphoons the new normal, and the need to act not just to respond to disasters but to reverse climate change,” he said.

The typhoons that hit the country were not “acts of God or mere natural occurrences,” he said, but “manifestations of climate change.”

Picardal, 60, will start his Dec. 10-23 pedal tour in Manila and expects to cover a distance of 1,800 kilometers to Iligan City, where hundreds of people died at the height of Sendong in 2011. Anybody can bike with him, he said.

It would be different from his previous bicycle feat, he said, as he would be fasting during the day.

The priest has been diagnosed with atherosclerosis and myocardial ischemia, a mild heart ailment, but he said this would still not stop him from fulfilling his mission.

“I was able to bike, run and walk across the Philippines, Mindanao island and Spain. If I followed the doctors’ advice, I would not have done that,” Picardal said.

The risks PH face due to climate change