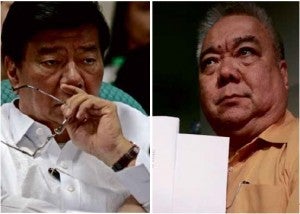 MANILA, Philippines – Former Iloilo provincial administrator Manuel Mejorada insisted on Tuesday the plunder complaint he filed against Senate President Franklin Drilon and two Cabinet members for the alleged overprice of the Iloilo Convention Center (ICC) was not a “dud,” saying the Ombudsman had found basis to conduct a preliminary investigation.

Mejorada said the Ombudsman had the power to dismiss a case outright if it saw that it had no basis in fact and in law for a case. It could also conduct a fact-finding investigation if insufficient evidence was submitted, he said.

The Ombudsman has ordered a preliminary investigation and directed Drilon, Public Works Secretary Rogelio Singson, Tourism Secretary Ramon Jimenez Jr. and Tourism Infrastructure and Enterprise Zone Authority (TIEZA) head Mark Lapid, among others, to file their counter-affidavits to the complaint.

“Apparently, the Ombudsman doesn’t think my complaint is a dud,” Mejorada said in a statement.

“It found sufficient basis in fact and law to proceed with the preliminary investigation without doing its own fact-finding as it does in most cases,” he added.

Mejorada may also file his reply to the counter-affidavits, after which his complaint would be deemed submitted for resolution.

Mejorada had initially alleged the ICC was overpriced based on earlier statements by Drilon that the project was to cost P300 million.

He later produced the deed of donation for the land on which the ICC stands, and said that based on this, the project was only supposed to cost P200 million.

The deed of donation stated that the Department of Tourism, in accepting the land from Megaworld Corp., bound itself to “earmark, raise and/or appropriate, through the Tourism Infrastructure and Enterprise Zone Authority, and/or available government funding… P200 million for the construction and development of the Iloilo Convention Center.”

Drilon, the main proponent of the ICC, had belittled Mejorada’s allegations, saying the latter had misunderstood the deed, since the P200 million was Tieza’s contribution to the building construction and was not the total cost of the project.

The amount was also for the project’s second phase and had not yet been used, he said.

He and the other officials also denied the project was overpriced.

Drilon and other senators had criticized Mejorada for his testimony in a Senate inquiry where he admitted that his complaint about the “overpriced” ICC was based on data he took from Wikipedia and “whispers” from architects in Iloilo.