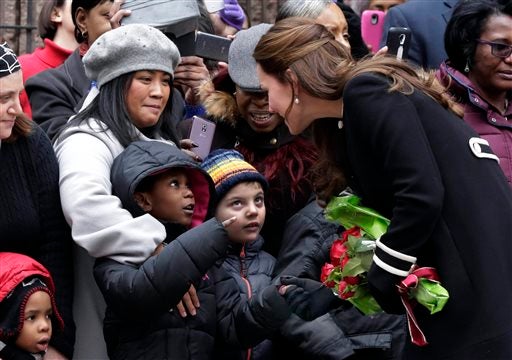 Kate, Duchess of Cambridge greets children and parents outside the Northside Center after her visit, in New York, Monday, Dec. 8, 2014. Kate and Prince William are on a three-day visit to the US, their first official visit since a 2011 trip to California. AP

NEW YORK — Britain’s Prince William sat down with President Barack Obama in Washington on Monday and unveiled an effort to curtail illegal wildlife trading, while his wife, Kate, made an impression of a down-to-earth duchess on preschoolers and prominent British expats in New York.

In the first full — very full — day of the popular royal couple’s first visit to either place, William went to the White House and spoke at a World Bank conference. Kate wrapped Christmas gifts and helped children decorate picture frames while touring a child development center with New York City’s first lady, then talked technology, theater and more with a British-success-story guest list at a lunch at the consul general’s home.

The Duke and Duchess of Cambridge are on their first official trip to the US since 2011. William, speaking at the World Bank, announced a new task force to develop recommendations within a year on how the transportation industry can help stop wildlife trafficking, calling it “one of the most insidious forms of corruption and criminality.”

Meanwhile, the duchess and city first lady Chirlane McCray met with families and heard about the work of the Northside Center for Child Development, which offers mental health and educational services.

“Very nice to meet you,” Kate told a classroom of 3- and 4-year-olds, who were embellishing picture frames with stickers.

After encouraging a boy named Sammy in his work, the duchess, who is expecting the couple’s second child, turned to a girl named April.

“Where should I put this one?” Kate asked, affixing a sticker.

Kate and McCray later wrapped children’s Christmas presents in the center’s gymnasium, with Kate joking that she hoped she’d be given a square package to tackle.

Later, Kate chatted with lunch guests including actor Matthew Rhys, TV and theater producer Colin Callender, Parsons The New School of Design fashion dean Simon Collins and tech news site Mashable founder Pete Cashmore. She asked how Callender’s recent New York staging of “Macbeth” had been received and told Cashmore his “must be such an exciting industry to be a part of.”

During the event at the British consul general’s residence, William made a brief speech on the plight of the world’s most iconic species being “butchered in the name of trinkets and medicine” before ending it on a lighter note.

“I’m off to shoot some hoops now, or whatever it is you Americans say.” The couple then traveled to the Barclays Center in Brooklyn to catch an NBA game.

The royals are visiting a city where thousands of people have protested over the past week to decry a grand jury’s decision not to indict a white police officer in the chokehold death of an unarmed black man, Eric Garner. More than 200 people demonstrated outside the Barclays Center while the royals took in the game.

Earlier, James had said that playing with William and Kate in the audience would be “a huge honor.”

As the royal couple headed to their seats during the third quarter, fans stood and cheered. The royals were shown on the overhead scoreboard during a stoppage of play. Kate, wearing a grey jacket, waved to the camera as the crowd roared. Jay-Z and Beyonce were led across the court between the third and fourth quarters to chat with them.

The royals’ schedule for their three-day trip includes a visit to the National Sept. 11 Memorial and Museum, a visit to showcase arts education at a youth organization, and a black-tie fundraiser for their alma mater, the University of St. Andrews.

Earlier Monday, Kate, dressed in a black coat by the British fashion brand Goat, was greeted with cheers from several dozen spectators as she arrived at the Northside Center. Aaron Victor and wife Crystal Pizarro had waited almost an hour on a freezing day with their 3-year-old daughter, London, to catch a glimpse of the duchess.

“It was a very good experience, and I’m glad she got to see her,” Pizarro said.

Read Next
Sierra Leone doctors strike for better Ebola care
EDITORS' PICK
SMDC’s Bloom Residences: A master planned community that cares for your health and wellness
COVID-19 cases in PH pass 3.2 million mark with 37,154 new cases — DOH
Over 3 Million worth of prizes to be won at Smart Padala’s SENDali Manalo Promo!
Upsilon, Unilever give ‘real talk’ on climate change crisis
What to expect as Metro Manila starts ‘no vaccination, no ride’ policy on Monday
Metro Manila’s daily COVID-19 growth rate drops to 2% — Octa Research
MOST READ
Thailand records first Omicron death
‘Not my loss’: Did Kris Aquino just comment on her breakup with Mel Sarmiento?
Prince Harry sues for UK police protection
Ivana Alawi tests positive for COVID-19, urges public to comply with health protocols: ‘No one’s above the law’
Don't miss out on the latest news and information.