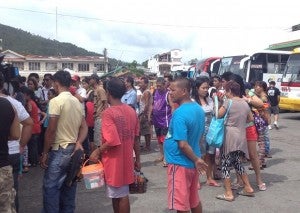 MATNOG, Sorsogon— Around one thousand passengers have been stranded in different ports in the country as of Saturday morning due to typhoon “Ruby” (international name: Hagupit).

The Philippine Coast Guard in an advisory said 952 passengers have been stranded as of 4 a.m. Saturday.

The Coast Guard said 40 vessels, 115 cargo vehicles onboard roll on/roll off ships, 9 motor bancas have been stranded since Friday.

It added that 49 trips were cancelled due to rough seas.

At Matnog port in Sorsogon, operations remain suspended and will resume only after the public storm signal is lifted in the province.

Stranded passengers and vehicles have been evacuated by the authorities who pointed out that the port is unsafe during typhoons.
The entire province remains under public storm signal number 2 although strong winds and heavy rains are yet to be experienced here.

According to the 5 a.m. bulletin of the Philippine Atmospheric Geophysical and Astronomical Services Administration (Pagasa), Ruby was spotted 40 kilometers East Northeast of Borongan in Eastern Samar, packing maximum sustained winds of 195 kph near the center with gusts of up to 230 kph.

It is expected to make landfall in Eastern or Northern Samar by Sunday morning.