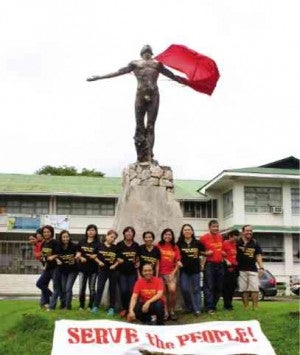 LOS BAÑOS, Laguna—Several decades ago, they were hiding behind pseudonyms and holding clandestine meetings.

On Sunday, they were laughing out loud, recalling the dangerous times when they challenged martial law on the streets and in campuses.

Former members of the underground youth group Kabataang Makabayan (KM) gathered at the University of the Philippines Los Baños campus here in a reunion that many of them would not have thought was possible during the times they hid from authorities.

“There were jokes that since we had this streamer of ‘Serve the People’ we might as well put up a barricade at the [UPLB] gates,” said Pio Mijares, 45.

To Bayani Cambronero, 54, the gathering was “euphoric.”

Mijares and Cambronero, along with 70 others, recalled their time as activists as they commemorated the anniversary of Kabataang Makabayan (KM-Nationalist Youth).

KM is an activist youth group that went underground after the declaration of martial law. The group, advocating the so-called National Democratic line, has also been closely associated with the Communist Party of the Philippines (CPP). It still is underground.

On Sunday, the alumni, some with their children in tow, gathered around the campus with streamers and flags of the youth movement.

“Our purpose is to reconnect and build a network that will help the families of the martyrs and those who went full-time (in activism),” Mijares said.

The event was a rare assembly of those who remained active in the movement and those who opted to pursue various professions. There was Teddy Casiño, former party-list representative, and others who later became lawyers and ranking government employees or local government officials.

Some, like Yolly Catalla, now in her 70s, came in memory of her younger sister Cristina. Cristina was studying economics at UPLB when she disappeared, believed to have been abducted by state forces during martial rule.

There were also “victims” of the CPP’s internal purging and were suspected of being government agents in the 90s. “But even then, there was no animosity (during the homecoming),” Cambronero said.

The group plans to put up a marker on campus that would bear the roster of UPLB activists killed, abducted or who died as members of the New People’s Army, the CPP’s armed guerrilla force, from martial law until recently.

“So far we have 20 (names) that we initially plan to publish online,” Mijares said. He said they also planned to raise funds for political prisoners who formerly studied at UPLB.

“There is still a need for activism as this affirms that nothing much has really changed over the years,” Mijares said.